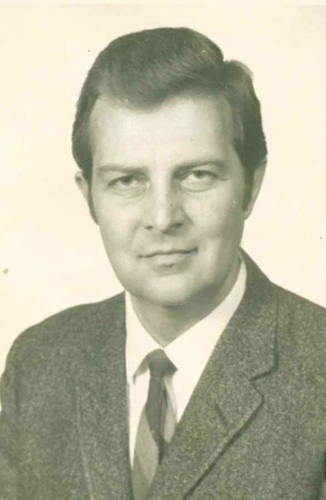 Bill was a graduate of the University of Utah, and earned his Ph.D. in Mathematics from the University of Chicago in 1958. He taught for six years at Brandeis University in Waltham, MA, and spent the rest of his career on the math faculty at Rutgers University in New Brunswick, NJ. His research interests included algebraic geometry, elliptic surfaces, and modular forms.

An avid amateur geographer, Bill enjoyed taking his family on long drives through the countryside, taking long detours in search of local ice cream emporiums or peach orchards, and finding his way back to the route using the "Jordan curve theorem." Wherever he travelled, he always wanted to know which direction the water was flowing.

Bill delighted in sharing his love of mathematics, and math puzzles and games, and dreamed of writing an elementary primer to teach first graders to read through the use of math examples (square roots). He was a lifelong devotee of technical science fiction, sang in several choirs, and later in life became an enthusiastic amateur artist. He was a devoted husband and father, and took loving care of Kathy in the last few years of her life, as her health deteriorated.

Bill is survived by three children, Bill (Marika Fischer) Hoyt of Madison, WI, Tim (Lisa Wright) Hoyt of Wakefield, RI, and Melinda (Harald) Paulsen of Ebersheim, Germany; five grandchildren, Mara and Mina Hoyt, Liam, Ben and Jon Wright-Hoyt; and by his youngest sister Marsha Hogan of Elkins Park, PA. He is further survived by his nieces, nephews, and other relatives and friends.

Those wishing to express their sympathy with a memorial may wish to consider a donation (in lieu of flowers) to American Rivers (www.americanrivers.org).

"I was business manager in the Math Dept at Rutgers and have fond memories of interactions with Dr. Hoyt. My sincere condolences to the family."

"Some memories of Bill are as fresh as our reunion last week. He was basking in the love of so many of his family and friends, pleased to get news from the New Jersey circle, and enjoying the annual celebration around his birthday. Going back decades, Judy and I were lucky to have the chance to visit Bill and Kathy during his German sabbatical in Bonn. They both treated us royally. Bill was the tour guide, driving the four of us all over: up into the Eifel, where a new acquaintance showed us the amazing Roman springs and pipes built to supply the new retirement colony (Cologne) for Roman legionnaires; up the Mosel, to walk through gorgeous vineyards and enjoying ice cream at a special shop in Kues; to the caves of the Sauerland. Such lavish welcome for two friends they had met only the year before! Bill also did me the honor of asking me to create dynamic, three-dimensional realizations of formulas related to elliptic equations. He responded on an artistic level to the interplay of colored surfaces, never mind that I could not grasp their significance. His singing voice was truly beautiful, but I rarely got to hear it -- I believe that his appreciation for music lay far deeper than even outward sound.. An extraordinary and loving human being who lives now through the many lives he touched."