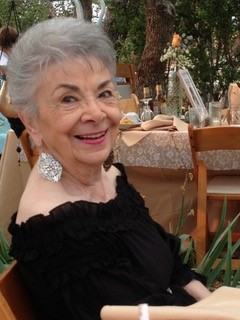 Dorothy Fodell Davies passed away peacefully on Wednesday, April 27th, 2022 at the Buckingham Senior Living facility in Houston Texas where she lived for the past 11 years. She was 99 years young. Dottie, as she was affectionately known, was born in Houston TX to George and Matilda Fodell in 1922, the third of six siblings. She was preceded in death by the love of her life, Richard Bronson Davies, her parents and three of her siblings, George Fodell Jr., Edna Delisle and Emma Kaiatt. She is survived by her three children, Marjorie White and her husband Doug, Marsha Parker and her husband Charles, and Richard Davies and his wife Marcella. She is also survived by brother Dr. Harvey Fodell and wife Kathy, sister Beverly Saleh and husband Bill, and seven grandsons whom she adored along with their families: Jason White and wife Christine, Andy Parker and wife Dylan, Tyler Davies and wife Melissa, Darin White, Bronson Parker and wife Chloé, Cameron Davies and wife Kaycee, and Cullen Davies and wife Fernanda. Dottie was blessed with 15 great-grandchildren whom she also adored. They all adored her right back.

Dottie attended Reagan High and grew up with her siblings working in the family business, the Oriental Cleaners which her father founded in 1918 and built into a thriving business. She stayed there until her retirement at 76 years old. Along the way she was introduced to a cute serviceman by her sister Emma, who picked Dick out of all the men who passed through Ellington Field. It was love at first sight and they married four months later. The love and devotion they had for each other was evident to all who knew them, and served as a wonderful example to their children and all their heirs.

Somehow Dottie managed to work from 7am until 6pm five days a week (and half days on Saturdays), and still create an amazing family life for her husband and three children. There was nothing she couldn't cook and she was a renown seamstress. She would whip up dresses for the girls and shirts for the guys in no time. She taught her girls how to sew as she knew it could come in handy one day. Her pies were famous as were her parties which she loved to give well into her 80's. She was an accomplished bridge player and loved to play with her friends at Pine Forest Country Club and later at the Buckingham. She also enjoyed traveling with their group, "The Dirty Dozen", five other couples they met from the Spring Branch area where they raised their family. Dottie was known for her beautiful and delicious Christmas baking that she continued to do each year and deliver to friends and family all around town. She had boundless energy.

Dottie brought so much joy to so many, whether a daughter, son, grandchild, great-grandchild, or friend, she was a mighty force in their lives. She had a sparkle that set her apart, and that her husband Dick easily spotted some 77 years before. And she had gumption, which was so important to Dick. She was not only devoted to her beloved husband but also to her sisters and brothers, taking care of many of them before they died. This amazingly beautiful and caring woman will be greatly missed by all who had the privilege of knowing her.

The family would like to thank her three wonderful caregivers who lovingly tended to Dottie in the last years of her life: Margaret Dantes, Judith Makwega and Pamela Kangame. Their devotion and care of Dottie was evident, and very much appreciated.

A memorial service will be held for Dottie on Thursday, May 19 at 2pm at The Buckingham Senior Living Facility, 8580 Woodway Drive, Houston 77063. A reception will follow the service. In lieu of flowers, donations may be made to the Alzheimer's Association or Community of Christ Church, where she was a lifelong member, 10040 Grant Road, Houston 77070, attention Kathy Wingard.