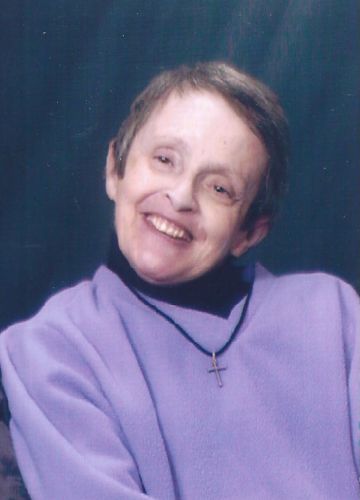 Sheryl Ann (Martins) Andre was born on June 22, 1945 to Antonio and Helena Martins of Fall River, MA. She and her younger brother Victor grew up in the restaurants her parents operated in Fall River and in Newport, Rhode Island, where Sheryl also acquired her lifelong love of the seashore. After graduating from BMS Durfee High School in 1963, she enrolled at the University of Massachusetts-Amherst, ultimately earning a Bachelor of Science degree and teaching certificate in mathematics in 1967, a course of study that included the new field of computer programming. While at UMass, she married Thomas Andre in 1966.
Upon completing her degree, Sheryl moved to the Midwest, where she used her computer programming skills in positions for State Farm Insurance and the University of Illinois-Bloomington. Her passions included reading, eating out (particularly lobster), the occasional sip of Southern Comfort, and traveling the roads and rails of North America from Canada to Colorado to California.
She moved to Cortland, NY and gave birth to her children David (1971) and Tamara (1974) before finally settling down for good in Ames, IA in 1974. There she joined the Computer Programming division of the Iowa Department of Human Services in 1975 and worked there until deteriorating health required her to retire in 1988. Sheryl lived in Ames with her mother, Helena Martins, until Helena's death in 2007; she moved to Bethany Manor in Story City in 2011. At Bethany, she was considered "the expert" in technology and computers, using her laptop, iPad and the internet to stay connected with her friends, family, and pen pals all over the world. She especially enjoyed her weekly Skype video chats with her granddaughter Josie in San Francisco and was able, via the internet, to see her newborn grandson Frederick on his birthday, August 12, 2012.
For most of her adult life Sheryl suffered from scoliosis and syringomyelia, a painful, degenerative nerve disease that limited her mobility and physical independence but never limited her fighting spirit or tenacious determination to help others. Sheryl was active in the SM community, using her technological savvy to stay connected with others, leading SM support groups through ASAP (American Syringomyelia & Chiari Alliance Project), and working to raise funds for medical research into the condition. She was also instrumental to an investigation into the status of disabled accessibility to Ames businesses, which led to improvements in local laws in the 1990s.
Sheryl spent most of her considerable energy and passion of the past 10 years into being a member of Cornerstone Church of Ames. Her faith in God was a foundational rock for all she did. She was always looking for ways that she could serve others through prayer and action, including emailing and encouraging others inside and outside of the church, attending multiple bible studies and connection groups, digging into the bible (her favorite book), typing up the church directory, organizing weekly prayer sheets, and mobilizing prayer teams. Sheryl's perseverance and humor were well-known and she was respected for her fearless, positive attitude. She wanted all to know that Jesus loves them, that Jesus died for them, and that they too can enter the gates of Heaven just by believing in him. Sheryl pressed on toward the goal and leaned into the tape until the very end of her race.
Sheryl passed away peacefully on August 23, 2012 at Bethany Manor. She spent her last days and hours surrounded by family and friends.
Sheryl is survived by her daughter and son-in-law, Tami and Chris Hicks of Ames; her son and daughter-in-law David and Melissa Andre of San Francisco, CA; her grandchildren Josephine and Frederick Andre of San Francisco, CA; and many beloved friends all over the world.
Sheryl requested that, in lieu of flowers and gifts, memorial donations be made payable to either:
Cornerstone Church of Ames (www.cornerstonelife.com) or ASAP (The American Syringomyelia & Chiari Alliance Project), (www.asap.org). Please mail donations to her family c/o Tami Hicks, PO Box 2491, Ames, Iowa 50010
A memorial service is scheduled for 10:30am on Friday August 31st at Cornerstone Church in Ames, with a luncheon reception to follow. All who knew her or her family are welcome to attend.
Grandon Funeral and Cremation Care is assisting the family.

"We appreciated Sheryl's sense of humor, as well as her spirit of determination. But the most powerful memories we will always have of will be her love for her family, and her love for Jesus as was displayed in her amazing prayer life. She was an example to all of us -- even our daughters."

"Sheryl was a most wonderful mother and friend, especially when I saw her, Dave and Tami most in the 1980's."