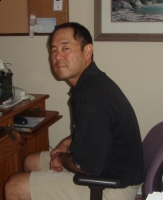 Melvin was born on April 20, 1957, in Oxnard, California. He grew up in Ventura County, where he was known in elementary school as "the kid who always knew all the answers but never raised his hand." Following graduation from Oxnard High School in 1975, he began an early career as a sheet metal machinist, working at Lockheed and other companies in aircraft fabrication in the Los Angeles area. While living in Southern California, Melvin enjoyed fishing with friends and spending time with his canine companion, Bear.

During the late 1980s, Melvin changed careers, enrolling at the University of California, Santa Barbara, and receiving a Bachelor's degree in Political Science in 1993. He next moved to New York City and enrolled in the International Studies program at Columbia University, graduating with his Master's degree in 1995.

For fifteen years, until June, 2010, Melvin worked as a consultant for System Planning Corporation in the Washington, D.C., area, contributing to government-related projects on national security. During this time, he developed a passion for golf and spent his leisure time on weekends out on the links with friends.

After residing for many years in Arlington, Virginia, within an hour's drive of his sister and her family, Melvin moved in August, 2010, to Bellevue, Washington, to be closer to his brother and his brother's family, and parents, who concurrently relocated from California to be with Melvin during the final months of his life.

Surrounded by family members, Melvin passed away on November 20, 2010, at the University of Washington Medical Center in Seattle, Washington, having been admitted a few days prior with complications of his late-stage kidney cancer.

Melvin is survived by his parents, Yoshitaka and Mary Sakazaki; sister, Denise Grove, and her children, Dustin and Davis; brother, Lloyd Sakazaki, sister-in-law, Naoko, and their children, Brody and Trey; and many friends.

"I happen to be talking about the people we worked and played gold after work at Lockheed "Skunk Works" , so I decided to look up our foursome group and found that Melvin "Mel" had passed on in 2010. Sorry but it's now Jan 28.2016. For the short time that we worked, Jerry, Carlos Mel and my self, Jimi hung out at work and after work for a round of golf. I was always into photographing and somewhere I have those most memorable photos of the good times. What stared this search was another coworker who just pasted away January 25, 2016, Ferris "Holly" Hollinquest, he was 94, Same department as us. In 1990, Lockheed had reduced its work force with layoffs, All three of the golfing buddies were gone but I had manage to hang on due to 2 more years of seniority . We lost contact due to lack of technology then (cell phones), but with Internet, it's an amazing tool. Now I search of his name on Google, his photo appeared with had a link on the bottom of the page. I was in DISBELIEF on what I was reading. It can't be him. The more I read and can't seam to accept it. I So Disappoined that I had not made any attempts on our reunion. I have no excuse. Mel was one year older than I, and I too had cancer, developed Stage III colon cancer Febuary 2010, and had manage to remove it. All that needs to be said is that Mel was intelligent, respectful professional and had a heart of gold. I will miss him dearly and cherish the fun times we shared at the "SKUNK WORKS". " I know that I've been blessed To have been one who's life he touched With warmth so infinite" Your Buddy, Jimi "