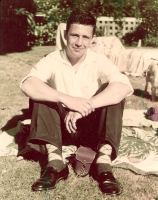 Paul was born in Detroit, Michigan to parents Jennie Josephine and Samuel John Lewan. As the son of a navy radio operator, Paul was raised in several different places, including Pearl Harbor, Panama, Washington D.C., Ilwaco, and San Diego, before the family finally settled in Washington State. Most of his childhood was spent at the residence on Military Road in SeaTac. He attended local grade school at Sunnydale and Angle Lake Elementary, and graduated from Highline High School in Burien. He went on to the University of Washington, earning a masters degree in psychology and his teaching credentials.


As a child, Paul talked about caring for the chickens and rabbits, and milking the goats. He had a life long love of music, starting with picking berries to earn money for violin lessons, and playing in the high school symphony. He enjoyed youth activities in scouting, and DeMolay.


Paul was a Korean War Veteran and retired from the Army Reserves as a captain. In 1957, while attending the University of Washington, he met and married Carolyn, his wife of 53 years. Paul worked busing tables at Ivar's and as tooling inspector at Boeing, finally starting his career as a teacher at Wenatchee Valley College. From there, he taught at Sylvester Junior High, Highline Community College, and in 1965, Green River Community College, where he was part of the original faculty. He retired in 1994 as Chairman of the Social Sciences Department.


He and his wife have been members of Lake Burien Presbyterian Church since 1960, and he served as a deacon and an elder in the church. They have been members of the church's Spinnaker group many years. He enjoyed playing his violin and viola in the Highline Symphony, Federal Way Philharmonic, and the Rainier Symphony. Paul was a Mason, a Shriner and member of the Elks Club.


Paul passed away at Aegis Living after a long debilitating battle with Alzheimer's disease. His kind and chivalrous spirit was apparent until the final days of his life, and we regret that we did not have a little more time with him. His family misses him and will always remember him. God bless you and keep you, our friend, father and husband.

"Rest in peace dear friend. I think of you daily and miss you very much. You always brighten my day."