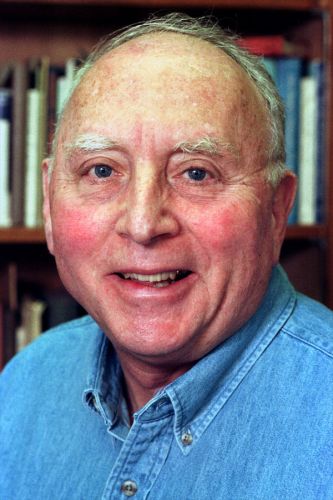 Madison / Evanston, IL - Herbert Martin Kliebard, loving husband, father, grandfather, friend and ground-breaking scholar in curriculum planning, the history of education, and on the educational reformer John Dewey, died peacefully at his home in Evanston, Illinois on Monday, June 8, 2015. He was 84. He was preceded in death by his beloved wife, Bernice (Bleiweiss) Kliebard, to whom he was married for 43 years.

Herb was born in the Bronx on July 24, 1930, the only child of Yetta (Yaskulka) and Morris Kliebard. He graduated from Christopher Columbus High School, thereafter attending City College in New York, where he obtained his A.B. in English and, thereafter, his M.A. After teaching for a year at Bronx Vocational College - the inspiration for the novel and movie "Blackboard Jungle" - he served in the Army's Medical Corps, returning upon completion of his stint to his prior teaching position. He later worked as a reading specialist for the Nyack Public School System before beginning his doctoral studies at Teacher's College, Columbia University.

After earning his doctorate, Herb joined the faculty of the University of Wisconsin-Madison in the departments of curriculum and instruction and educational policy studies in 1963. He never fully retired, and was professor emeritus in the School of Education until the time of his death. Herb obtained numerous awards for his scholarship over the course of his career, including a distinguished faculty award from the UW, a distinguished alumnus award from Teacher's College, the Outstanding Achievement Award from the John Dewey Society, and a lifetime achievement award from the Curriculum Studies Division of the American Educational Research Association. Herb was the author of numerous books and articles, his most celebrated of which was The Struggle for the American Curriculum, first published in 1995 and currently in its third edition. His body of work also includes his personal favorite, Schooled to Work: Vocationalism and the American Curriculum, 1876-1946; along with Changing Course: American Curriculum Reform in the 20th Century; Religion and Education in America: A Documentary History, as well as many others.

A memorial service to celebrate Herb's career and accomplishments is being planned.

"I only could call Mr. Kiiebard, Mr. Kliebard, although we became colleagues following my doctoral work at UW-Madison. I kept all his lectures from his Curriculum Planning class in a notebook where I recopied them to read again and again. I shall miss his kindness, his humor, and his brilliant mind. When my father died, Mr. Kliebard came by and spent some time with me, consoling me when I most needed it. I will never forget him."

"Herb was a dear faculty colleague and friend of our father, Professor Edward Krug. Following our father's death in 1979, Herb was a great source of comfort to our mother, Annie Krug. He also was Peggy's major professor when she earned her master's degree in Curriculum and Instruction. We both remember the delight with which our father greeted Herb's acceptance of the offer to join the School of Education faculty. His enthusiasm for Herb, on both the professional and personal levels, never waned. Among so many other things about Herb, our father often recounted to us examples of Herb's endearing sense of humor and his colorful anecdotes about his childhood and youth in New York City. We treasure our memories of the happiness that Herb and Bernice brought to our parents. We express our deepest sympathies to Herb's family."

"I was a teaching assistant for Herb in 1970. What I learned from him as a student is incalculable. I drew upon what he taught me throughout my career as a curriculum administrator and professor. I recall that in the 1990's, a local school district with which I was consulting, adopted a proposed policy statement on schooling and religion that I drafted. It fast became a model for the county, the state of Michigan, and beyond. Its content derived entirely from what I had learned from Herb, and I am pleased to remember that I told him so at the time. It is only one example of the many indelible thoughts that he cultivated in me. His influence was profound, and he was among the very best of UW education professors who, during my time there, were a uniquely stellar constellation. I am saddened by his death, but I take comfort in my memories of him as a brilliant scholar, fine teacher, and a sincerely humble and kind man. His humor was also first rate. What a splendid legacy he leaves."

" Herb was my doctoral advisor. He was a wonderful, kind and thoughtful person. As a scholar and as a person, he provided an exemplary model. I have fond memories of the many hours I spent in his office talking with him about my work and life in general. He was a giant in the education field! Patrick Delmore, PhD 1986"

"Herbert Kliebard is the reason why I am a curriculum professor. When I started out in graduate school at Georgia State in 1990, I was convinced I would study educational administration. I put off the curriculum course in the administration certificate until the end - envisioning flannel boards and units on Mother's Day like I'd experienced as an undergraduate. My professor, George Stansbury, assigned Forging the American Curriculum, and it forever changed how I look at curriculum and schooling. I changed my degree to curriculum. Later, while in the program, I had an assignment to go and meet him. I remember traveling from Atlanta to South Carolina to hear him speak, and then I got to spend time talking one-on-one with him. It was the highlight of my education. He was truly instrumental in shaping my perspective and my work. "

"It with great sadness that I write these comments. As everyone has said, he was a wonderful scholar, teacher, and human being. I loved visiting him is in office that always looked like a tornado had come through it, but sure enough, Herb always knew were my paper was located among the many books, articles, and manuscripts scattered around that lovely corner office. I treasure the conversations we had when I was his student about Dewey and his contemporaries. He always added some interesting bit of insight that others seem to have missed. He lives on in all his works and students."

"I knew Herb during my time on the C&I faculty at the University of Wisconsin-Madison. He was a brilliant scholar, a wonderful colleague to have, and simply one of those people who was easy to like and to respect because of his humanity. We have lost one the true intellectual giants of the past century within the field of education. But I know from his many students, that we have also lost a wonderful human being. I hope that his family can take comfort not just by the high regard in which he was held by his colleagues and by other academics throughout the world; but also that they have the kinds of memories of Herb that allow them to continue to celebrate his life. I know that, even though I did not see him since leaving Madison, WI, I will miss him, his warmth, and his keen intellectual insights."

"This is a great loss not only professionally to the curriculum studies field but also personally to all those who studied and worked with Herb. He was brilliant, articulate, and prolific - and curious, caring and humble at the same time. He was also exceedingly patient and encouraging with new graduate students first learning what it means to take a scholarly approach to the curriculum field. Through his many publications, he will be remembered with great respect - and through recollections of personal interactions with him, he will be remembered with great fondness. Along with many others, I know, I miss him already. I thank his family for sharing him with the rest of us during these last 4+ decades. And I hope warm memories of times spent with Herb and the love of family and friends help to ease the pain of your loss."

"I admired Herb Kliebard, his scholarship on curriculum and curriculum history, the kind and thoughtful person he was, and stories of his teaching from those who were fortunate enough to have studied with him. His work lives on through those who study and extend it. His kindness will continue to be carried to future generations of educators by his students and their students. As a professor of curriculum studies in the generation after Herb, I remember so well from learning through conversations with him at conferences since the 1970s, and his emphasis on slow reading, which epitomized the care and thoughtfulness of his scholarly advocacy, in profound contrast to popular speed reading. I was impressed, too, with Herb's exemplary dedication to family, especially to his late wife Bernice and their daughter and son, as he lovingly related stories about them. I extend deep condolences to Diane and Ken, and to their families - and to Herb's extended family of students, friends, and colleagues."

"Herb was an amazing thinker, teacher, writer, and person. I was honored to be part of one of that last John Dewey, "Democracy and Education" Classics in Education seminars he taught. We worked through the book at a pace of about 25 pages a week. Most of the other students were practitioners and their insights and reactions enriched my thinking immeasurably. Herb didn't say much, but guided with grace and leading us to deeper understandings. One of the best educational experiences of my life. "

"The field of education has lost one of its kindest and most thoughtful scholars. Herb's visit to the Museum of Education in the early 1990s, as the first Witten Lecturer, has never been forgotten and helped to define that lecture series. He will remain a mentor to us all."

"Herbert M. Kliebard was a great advisor, mentor, an eminent scholar and a wonderful human being. As a teacher he demanded much, but in return gave much more. There are no words to describe the sorrow and hurt when I learned that he had passed on. I was blessed to have had him as my teacher, and will miss him terribly. I have only ever spoken to him or of him as Mr. Kliebard. Rest in peace Mr. Kliebard."

"memories of Herbert, the Kliebard household were many.. being a childhood friend of Diane's, I spent hours at the Kliebard home. Diane's dad (because back then we never called our parents by name, "Mr Kliebard") was quiet, kind and always with a slight smile. It was at the Kliebard's I was introduced to bagels and lox, along with other very yummy foods. A house filled with laughter and I loved being over there.. so sorry Diane and Ken. Your dad was very special one. "