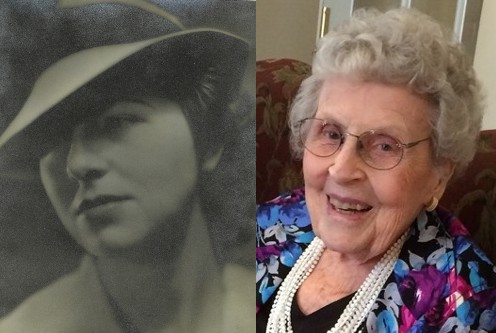 Doris Hunley Roberts, age 100, passed away on June 12, 2015 in Madison, WI, where she had lived for the past 25 years. She was born in Troy, Ohio on April 11, 1915 to Walter and Hazel (Ditmer) Hunley. Doris had one brother, Robert Hunley.
Doris graduated from Troy High School in 1933 where she lettered in basketball, and was awarded a gold pin in journalism. By the time she was 18, both parents had passed away, two months before her graduation.

These were the depression years and employment was hard to find. Eventually, Doris found a meaningful office job at Hobart Manufacturing, headquartered in Troy. In the five years she was there, Doris was promoted several times, eventually becoming executive secretary to the American Sales Manager.

During these years, she met and married Stanley S. Roberts, of Oxford, Ohio, who was working at an advertising agency in Troy. They married June 14, 1941. Together they had four children. Their growing-up years were spent in several cities which provided many valuable experiences: Dayton, OH; Detroit, MI; Racine, WI; Toronto, ONT., Canada; and Elm Grove, WI. Then, their children graduated and were off to college.

Another business move took Doris and Stan to Memphis, TN, where they resided for ten years. In the 1970's they moved to Santa Clara, CA to be near their daughter Bev and her husband, Perry, and their two daughters, to begin a new business venture with Perry. After retirement in 1985, Doris and Stan moved to Laguna Hills, CA, to join their son Scott to help grow his entrepreneurial business. Stan passed away in 1990.

In 1991, Doris moved to Madison, WI, to be close to son Jeff and his wife, Gail, and their family. She lived in the same apartment for 25 years, enjoying watching her Madison grandchildren grow up, marry and have children of their own. She began water color painting at 75, and proved quite adept at this art form. Her paintings appeared at Pasqual's-her grandson and families' restaurants, and at her church, Advent Lutheran. She joined the Judith Circle at church, and spent many hours quilting and volunteering in the office. Eventually, the "church ladies" began visiting Doris regularly, which she dearly treasured.

Doris will be remembered for her style, wit, and meticulous attention to detail. Her cherry pies, 'special formulated' cookies, and hand-decorated birthday cakes delighted family and friends down through the years. It is her character for which Doris will be most remembered and revered. She was a woman of faith, kindness, genuine interest in others, perseverance, endurance, and giving nature.

In lieu of flowers, donations may be made to Advent Lutheran Church, Madison, WI; the Monroe Streets Art Center, 2526 Monroe St, Madison, WI 53711, in celebration of Claire Roberts; or Agrace Hospice Care, 5395 E. Cheryl Parkway, Fitchburg, WI, 53711. A Celebration of Life service will be held at a later date.

"My memory of Doris is one of an unconditionally loving woman filled with kindness, acceptance and joy for life. After we left Madison she wrote to us regularly and her words always brought us a smile. "

"Aunt Doris was like a true sister to my mother and an inspiration to me and my family. With dearest love and deepest sympathy to our cousins. Her memory lives on in all of us. "

"Doris lived a wonderful life, I only knew her in her later years. She was bright and cheery and was always interested in what I was doing. I think through sheer determination she made it to 100 years old living independently. She thoroughly enjoyed her wonderful 100th birthday party, as did I. She will be remembered fondly. She was a great mother-in-law. Cheers! Phil Lenihan "

"Our family was blessed beyond measure to have Doris as our mother. She lived in truth and passed with grace. Our gratitude to her and our father who pre-deceased her is beyond measure. Thank you for the many expressions of caring from family, friends and acquaintances."