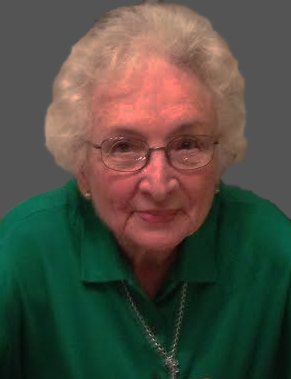 Phyllis Steinfest, of Deerbrook, died Sunday, June 21, 2015 at Langlade Hospital. She was 92 years old. She was born on September 23, 1922 in Antigo, a daughter of the late Edward and Verna (Krajewski) Rosio.

She married Thomas W. McGregor in 1940 from whom she was later divorced. He preceded her in death. After attending schools in the Antigo area she moved to Milwaukee where she was employed by the Northern Engineering Co. Although she left high school before graduating, she continued her education with courses in machine shop, welding, knitting and square dancing.

She returned to Antigo and married Arlie "Bucky" Steinfest at St. Hyacinth's Catholic Church. The couple resided in Antigo until 1967 when they built their home on Deep Woods Lake.

She was employed for over 35 years at Langlade Laundry and 12 years at Superior Cleaners in Antigo. As a life-long learner she returned to school to earn her GED at the age of 61.

Mrs. Steinfest was a member of Holy Family Catholic Church, Elcho and served numerous terms as president and secretary for the Ladies of Holy Family organization. She took care of the altar linens, decorating the church and was a lector for many years.

A memorial Mass will be held on Friday at 11 a.m. at Holy Family Catholic Church, Elcho with Rev. Jeremiah Worman officiating. Burial will take place in Lakeside Cemetery, Summit Lake. Visitation will be Friday at the church from 10 a.m. until the time of Mass.

Memorials may be directed to Holy Family Catholic Church.

The family extends a special thank you to the staff at Eastview Medical and Rehabilitation Center for the wonderful care they provided Phyllis.

"Wow does this bring back a lot of fond memories, sorry to hear of her passing & our condolences go out to her family our thoughts & prayers are with you. I grew up w/Jackie & Mary & knew Bucky, I would count my $ in their basement after collecting on my paper route & enjoy the mini sock hops in the basement,also w/to school & was friends W/Ron & Cy! God bless!"

"We will miss seeing Phyllis at Mass at the nursing home. Doug plays guitar and I come along. She was always happy to see us. Mary was such a good friend of mine and Phyllis was good to all of her friends. Then years later she was a customer at the Bank were I was lucky to have her as a client! Sorry for your loss."

"I have known Phyllis since she and Bucky first met as I spent summers at my Aunt Lillian Guenthner were Bucky worked since he was 16.I had so many wonderful times with Phyllis and Bucky ,hey were like parents to me and will always love them .Phyllis was such a wonderful care giver, she was always taking care of someone that needed help whether it was her Dad or Mom or relative or friend she was always there for them.She and Bucky have both gone home now and they are happy and together with their wonderful daughters and grandson and their loving parents."