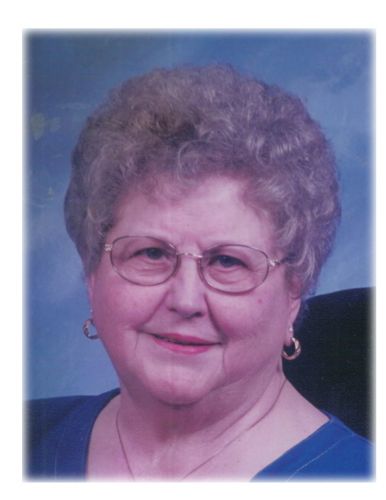 Virginia Drexler, of Antigo, died Sunday, June 28, 2015 at Eastview Medical and Rehabilitation Center under the care of LeRoyer Hospice. She was 87 years old. She was born on October 26, 1927 in Antigo, a daughter of Peter and Loretta (Wolfe) Theisen. She married Anton Drexler on June 30, 1951 at St. John Catholic Church. He preceded her in death on January 1, 2014.

She was a graduate of Antigo High School with the class of 1945.

Virginia worked for General Telephone in Green Bay for 5 years. In Antigo she was employed as a clerk for Kingsbury Photo for 5 years and Weinbrenner Shoe Company factory for 18 years. She was a member of St. John Catholic Church.

She enjoyed crossword puzzles, vegetable gardening and flower gardening, especially growing begonias. The time spent with her granddaughters was very special to her.

In addition to her husband she was preceded in death by three sisters Joan and Luella Theisen and Marie (Tony) Hallada, two brothers Lavern "Bud" (Mary), Eugene (Sue) Theisen, and one sister-in-law Florian Theisen.

A funeral Mass will be held on Friday at 10:30 a.m. at St. John Catholic Church, Antigo with Rev. David Schmidt officiating. Burial will take place in Queen of Peace Cemetery. Visitation will be 3:30 - 6:30 p.m. on Thursday at the Bradley Funeral Home and 9 - 10 a.m. on Friday also at the funeral home. A parish wake service will be held at 4:30 p.m. Thursday at the funeral home.

A memorial is being established in Virginia's name to St. John Catholic Church and All Saints Catholic School.

"I am so sorry to hear of your loss. Recently I lost my dear mother and found great comfort in the words of Jesus at John 11:11-14, where he liken death to being asleep, and at John 5:28,29 - "All those in the memorial tombs will hear his voice and come out." For more comfort, I turn to website: www.jw.org (Search: Comfort)"

"My Aunt was one very special lady. Always a smile on her face and always wanted to know how you were doing. She was truly one of a kind and I know that God has one GREAT angel in his midst. Lord, be good to her....she deserves only the best! You may be gone, but you will NEVER be forgotten. You are forever with me. I love you and until we meet again!"

"even though I only met her a few times, Virgina was a kind hearted woman who loved her grandchildren. She will be missed by many. "