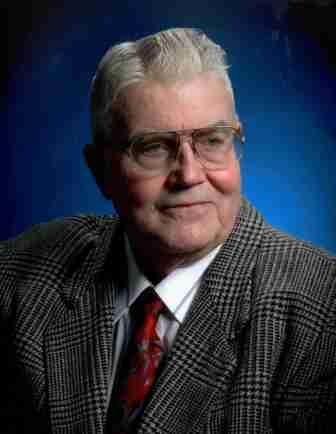 Van Meter, Delmar Blaine
Age 77 of Ames passed away January 5, 2010. He will be greatly missed by his family and friends.
A gathering of friends and family visitation will be held from 7:00 -- 9:00 pm Saturday, January 9 at Grandon Funeral and Cremation Care, 414 Lincoln Way in Ames. A Celebration of Life service will be held at 3:00 pm on Sunday, January 10, at First Baptist Church, 200 Lynn Ave. Ames. Burial has taken place at the Iowa State University Cemetery in Ames.

Dad was born January 16, 1932 in Cosby, Missouri near Kansas City. He was the son of William and Dora (Miller) Van Meter. He grew up on a small farm and learned to work hard, a skill he practiced throughout his life.

After college, Dad was on active duty in the Army from 1954-1956. He met Jo Mabrey while stationed in Colorado Springs, Colorado. They were married on August 27, 1956. He reached the rank of Lieutenant Colonel in the Army Reserve before retiring in 1993.

Dad was a Professor of Mechanical Engineering at Iowa State University from 1958 until he retired in 2000 and helped thousands of engineering students master difficult subjects including heat transfer, thermodynamics, and theory of internal combustion engines. Dad was a dedicated teacher and spent many hours talking with students, correcting papers, and preparing for lectures. He was sought after as a consultant by many clients and helped them with his expertise in thermodynamics and internal combustion engines.

Dad was an active volunteer throughout his life. He was a member of the First Baptist Church in Ames and served that organization as a member of the board of trustees and as a key member of facility and building project teams. He was a School Board Member for the Gilbert Community Schools and an Assistant Scoutmaster for the Boy Scouts of America.

On line condolences may be sent to www.grandonfuneralandcremationcare.com


Memorials can be sent to The First Baptist Church Boiler Fund, 200 Lynn Avenue in Ames.

Grandon Funeral and Cremation Care is assisting the family.

"Dear Aunt Jo, Kevin, Kelly, Kyle and Kimberly, Please know that you are in my thoughts and prayers. I have fond memories of Uncle Delmar - he will be missed. Love, Marcia"

"My deepest condolences go out to the Van Meter family. You will be in my prayers. "

"Both my husband and I knew Delmar though we didn't know we both did. My husband, Wayne, had him as an instructor when he firts came to ISU and was a collegue in the College of Engineering. I knew him from playing bridge. He had such a positive additude and I never heard him complain. We were both glad we had a chance to know him!"

"Mr. Van Meter was dedicated to a lot of things, teaching was just one of them. He was a dedicated father, husband, friend, and Christian to name just a few more. I don't think I ever saw Mr. Van Meter without him smiling. Mr. Sassaman's comments are right on the money. Mr. Van Meter seemed to know how to fix anything. (Perhaps that was the farm-boy in him?) Mr. Van Meter will be sorely missed by all who knew him. My most heartfelt condolences to his family. Teri"

"Hi, Please accept our heart felt sympathy for losing your father. Jim & Helen Sassaman Delmar and I worked on a number of projects around the First Baptist Church. He and I applied the shading on the south windows of the sanctuary. We found that the top panes are higher above the floor than we thought and it was hard to work on them without holding on to the ladder with at least one hand! We also installed the new ceiling and lighting in the basement rooms. Along with help from Buck Peterson we installed the new ceiling and lighting in fellowship hall. Of course Delmar was the head hauncho and we just helped in any way we could. Delmar loved to work and could do most every thing. He saved the church thousands of dollars with his efforts. He will be greatly missed by all of us. He was just a real good guy and a good close friend. Jim"

"I am sorry to hear of your loss. My thoughts and prayers are with you. I was a classmate of Kelly's from Gilbert. I remember going to Delmar's office at ISU and touring at VEISHEA with the Van Meter family. "

"I remember spending many hours and days at the Van Meters' home. We held our Cub Scout meetings there and it was always fun to play with Kelly, my neighborhood pal. Delmar had a small 1-wheel trailer he pulled bo get it started. ehind the family car. That trailer was a curious looking thing and I was intrigued by it. There was an old Ford out by the shop we used to play with and work on, trying to get it running. I'd pretend it was mine and I was driving it. I have alot of great memories of Delmar and his family. The world has lost another great man, highly respected and loved dearly. My thoughts are with his family and friends. "

"Did not know Delmar well as he was 12 years older than me but I did respect his accomplishments very much. I did not stay in contact with him and I lost contact with him when I went in the USMC and never returned to MO to live. I hope all goes well for his wife Jo, his children and grandchildren. Our Mother was very proud of Delmar."

"My condolences to the entire Van Meter family. I met Del when I joined the ISU faculty in 1991 as a young assistant professor. He was always friendly and helpful, and clearly cared a lot about the students. He set a wonderful example of how to be a great professor. He will be missed."

"I am shocked to hear that Delmar passed away. I was a classmate throughout high school at Maysville. His being able to attend our reunion this past October was special to all of those who were in attendance. May your family find peace in remembering what an outstanding person he was."

"To the Van Meter family: Linda and I were saddened to hear of the passing of Delmar. I had the priviledge of teaching and coaching the VanMeter children at Gilbert High School and know that the influence of Delmar and his wife was so instrumental in developing those great young kids. Our prayers go out to Delmar's family."

"To Delmar's family: I had the pleasure of meeting Delmar through the ISU Senior Classes Bridge Series with Andy Terry as our instructor. He was an especially nice person. Please accept my sincere sympathy at your loss. "

"I want share my sincerest sympathy on hearing of the Professor Van Meter's passing. He was one of my favorite faculty at Iowa State University in Mechanical Engineering. Having worked for the depeartment as a technician's aid I got to know him outside of the classroom. He was an excellent teacher and even nicer person. I enjoyed getting to know him and he is one of the reasons I am now back at Iowa State teaching mechanical engineering after 25 years working in industry. He will be missed and I pray that his family can receive some peace and joy in knowing what an positive impact he has had on many a young engineer's education and career. Phil 4:6-7"

"Dear Family I want to express my sincere sympathy for the loss of your loved one. You can be assured that comfort and hope are found in the pages of the Bible. Revelations 21:4 speaks of a time when sorrow will be a thing of the past. I hope this message brings you a measure of hope. Please take care of yourselves. Sincerely "