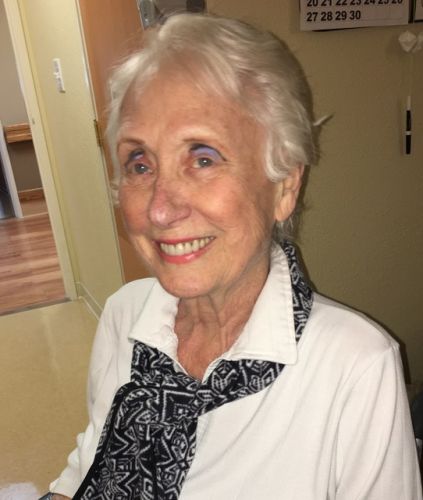 Darn it! Sue has died. She really has. I guess I thought the journey would go on forever. But what a journey it has been: sixty-two years of loving, arguing, laughing, working and playing together, blessed with two great kids, Dave and Karen, who made our lives so rich.
~ Karl Snepp

Suzanne Mae Lowe was born to Rosalie and Willard Lowe in Gary, Indiana, on October 21, 1932. She became the middle of three sisters, and highlights of her early life included being the Christmas Angel in the annual school pageant (being a blonde helped, she said), being chosen Track Queen in high school (dating the captain of the track team helped, she said) and being Valedictorian of Emerson High School, Class of 1950 (being smart helped, she said).

At Purdue University, Sue met Karl. They became best buds (Sue had a boyfriend back home), with Sue relentlessly fixing up Karl with unattached Pi Phi sisters, with whom Karl regularly struck out. Fast-forward: boyfriend back home faded, Sue ran out of willing sorority sisters, took pity on Karl, and they ended up getting married.

Karl's career took them to Monterey, California; West Lafayette, Indiana; Carbondale and Chicago, Illinois; and Philadelphia, Pennsylvania. Along the way, Sue acquired the hobby of making stained glass "suncatchers," which grew quickly into a full-time business with gift-shop clients throughout the United States. Karl claims that in the prime of her stained glass career, Sue was hands-down the best lead-solderer in the country. Sue and Karl retired to Tucson for 13 years before moving to Redmond in 2005 to be near Karen.

After Dave's death from medullary thyroid cancer in 1988, at age 32, Sue and Karl found much-needed comfort and support in The Compassionate Friends (TCF), a national non-profit, self-help support organization for families that have had a child die at any age, from any cause (www.compassionatefriends.org). They became active in local, regional and national TCF leadership. Together, they conducted chapter leadership training seminars throughout the US, and Sue was a founding director of The Compassionate Friends Foundation.

As kids, Sue and her sisters spent most summers at the family cottage on Lily Lake, in southwestern Michigan, where Sue developed a liking for fishing, swimming and other pursuits of nature that influenced the activities she enjoyed most in later life. Saltwater fishing (sailfish, marlin, mahi-mahi, salmon, etc.), snorkeling, hiking and birding were favorites. As she aged, spectator sports and other less demanding activities moved to the forefront. River cruises became a favorite. A trip to a different NCAA March Madness venue each year and Seattle Storm season tickets were annual rituals, and she became one of the Northwest's most intrepid spectators at Sheepdog Trials (as in the movie, "Babe"), often the first spectator to show up at the field at 7:00 on a chilly morning, bundled into her camp chair with layers of fleece, mittened hands clutching the binoculars that peered out from under her oversized stocking cap.

This year Sue slowed down, first because of a broken hip in March, which mended nicely over time, but then with what turned out to be cancer of an undetermined origin that metastasized to her lower spine and some other places. It did her in, and she died peacefully under the compassionate care of EvergreenHealth's Hospice Care Center in Kirkland on Friday afternoon, December 2, 2016.

Sue was "preceded in death," as obituaries put it, by Dave and by her niece Suzie and her nephew John. She is survived by her husband, Karl, of Redmond; their daughter, Karen, of Kirkland; and by her sisters, Margaret Wright, of Minneapolis, and Nancy Roberts, of Indianapolis. She is also survived by a wonderful three-generation collection of nieces and nephews, including both Jeffs, Steve, Doug, Jen, Heidi, Maggie, Jessie, Annie, Todd, Scott, Stephanie, Nika, Casey, Jack, Carter, Leo and Avery.

Memorial gifts to EvergreenHealth Foundation (www.evergreenhealthfoundation.com) would be meaningful to Sue, who as an interested donor would comb through the obituaries every Sunday to see how EvergreenHealth "did" in lieu of flowers. Was she competitive, or what?!

Sue would be honored if you would toast your memories of her with your favorite adult beverage. Hers was gin. On the rocks.

"Karl and Karen, Words cannot describe what my Suza-bell meant to me. Almost 21 years ago when I started at the National Office Karl, you and Sue were there volunteering nearly every month; that was the beginning of our friendship. Sue always had a smile, a hug and was always glad to see you. I will miss this dear lady forever! I am lucky that she has been my friend for all of these years. I say cheers to you Sue, keep them in line in heaven. xoxoxo "

"Brilliant obituary, beautiful woman inside and out, a joy to be with no matter the occasion. We laughed when we found out that my birth name is Carolyn Suzanne Lowe, so alike we could have been twins...of a sort. Grateful for the gifts of her energy with so many for so many decades. Karl, you gave me good counsel years ago. If flying Business Class won't change your lifestyle in five years, then for Pete's sake, fly Business Class. And so I have, thanks to your sage advice. That's what you and Sue did for all of us in TCF...you gave your all and we were all blessed in return. God bless Sue Lowe Snepp. Cis Lowe Dickson"

"Karl & Karen, On behalf of your classmates from the Horace Mann High School Class of 1949 we'd like to extend our sincere sympathy for your loss to both of you, and send our prayers for comfort and renewed strength during this Holy Season. May the coming year bring you peace and good health. We appreciate all you do Karl, to make our website such a success! Website Co-administrators, Bill, Dave & Erma "

"Carl and Karen, my heart goes out to you. I remember Sue as a warm, caring, elegant, and lovely lady. Her heart was all about family and The Compassionate Friends. I was so glad to see all of you in Scottsdale last summer. Barb Lorimor, Austin, TX"

"I had the great pleasure of having the Snepps as neighbors during the Glen Ellyn stop on their journey. I will always remember Mrs. Snepp's wonderful laugh and the joy and enthusiasm she brought to her life and shared with others. Remembering her warmly as I keep all the Snepps in my prayers. Tim McNulty "

"Karl, Marilyn and I send our prayers to you and Karen. Sue and you have a special place in our hearts. Sue was a wonderful person and a good friend to us. What a great journey you had together in this life. It was very special. We love you. Marilyn and French"