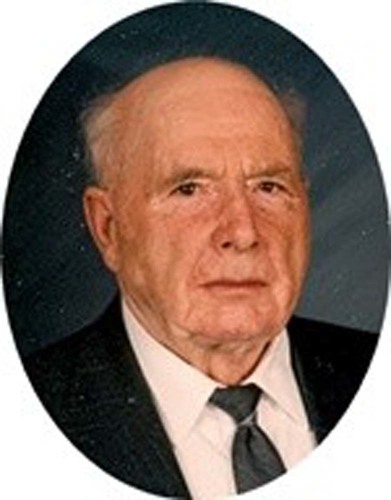 ORONOCO - Lester P. Riess, 90, died Sunday, March 21, 2010 at Pine Haven Nursing Home in Pine Island. Lester was born in Oronoco on May 6, 1919 to John and Alvina (Schwanke) Riess. He resided on a farm in Oronoco for 70 years. Lester married Emma Goeman on May 15, 1945. Lester is survived by a son, Leslie (Sue) Riess, of Cloquet, MN; three grandchildren, Kevin (Jessica) Riess, of Eveleth, MN, Paul (Melissa) Riess, of Cloquet, MN, and Nathan Riess, Woodbury, MN; two great-grandchildren, Sophia and Brayden Riess; and two brothers, Clarence (Marlene) Riess, of Rock Dell, MN, and Harold Riess, of Brainerd, MN.Lester is preceded in death by his wife of 52 years, Emma; his parents .A Funeral Service for family and close friends will be at 1:00 P.M. on Saturday, March 27, 2010 at Ranfranz and Vine Funeral Home with Rev. Dr. Norman Wahl officiating. Visitation will be an hour prior to the service at the funeral home. A private family burial will be in Oronoco Cemetery.

"I have so many great memories of the times we would get together.Looking for the green house, meeting Uncle Lester's halfway for picnics in the park, Your collection of comic books, and getting the cows from the pastures. It was so much fun when you would drive out to Renville.My deepest sympathy to you and your family.Elaine and Denny"