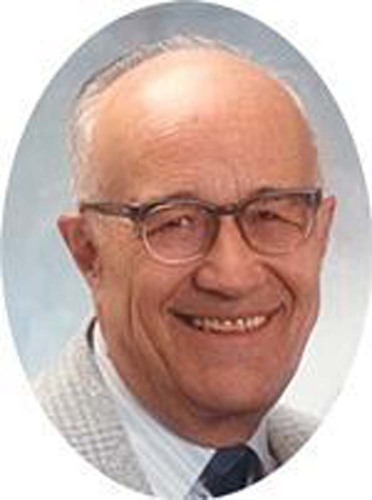 Harry Swan Larson, 92, of Rochester , died Thursday, December 16, 2010 at Golden Living Center Rochester East.He was born June 12, 1918 in Duluth , the son of Swan and Gertie Larson. He grew up in the Duluth Heights area and attended Duluth Central High School . He married Lila Eklund on November 16, 1940. Harry worked for Northern Pump in Minneapolis and Marine Iron and Shipbuilding in Duluth during the pre-war and early World War II years. He served in the U.S. Navy from 1944-1946.In 1952, the Larsons moved to St. Louis Park , where Harry worked for Minneapolis Honeywell, then Professional Instruments Company. They moved to Rochester in 1959 when Harry became manager of the Rochester PI Company shop. Like his father and brothers, he had a knack for all things mechanical, and you could tell by the expression on his face when he was figuring out how something worked and how to make it work better. He was a life member of the Society of Manufacturing Engineers and was a long-time member of the Rochester Exchange Club and the Rochester Elks Lodge. Later in life, he was introduced to golf by a neighbor and spent many hours working at the game. He made two holes-in-one and also won an award for hitting a Canada goose during a tournament.But the love of his life was spending time with his family: his wife, children, grandchildren, great-grandchildren, and nieces and nephews.He is survived by his wife of 70 years, Lila; his brother Roy (and Carol) Larson of Phoenix, Arizon; and by his children Jan (and Bob) Aaker of Rochester and Dennis (and Barbara) Larson of St. Peter; son-in-law Robert Sorenson of Cape Coral, Florida; grandchildren Joanne (and Mitch) Wayne of Wisconsin Rapids, Wisconsin; Tom (and Lorrie) Ellstrom of Austin, Texas; Cathy Ellstrom of Crystal; Debra (and Todd) Rasmussen of Bourne, Texas; Cindy (and Alan) Blair of St. Paul; Kersten (and Lyle) Hoffman of Brooklyn Park; Todd (and Jennifer) Vandal of Lubbock, Texas; Scott Vandal of Ft. Lauderdale, Florida; and 13 great-grandchildren.He was preceded in death by his parents, brother Robert Larson, sister Alice Cohen, and his beloved daughter Beverly Sorenson.There will be a memorial service at 1 p.m. Thursday, December 30 at Ranfranz and Vine Funeral Homes. Visitation will be two hours prior to the service. In lieu of flowers, memorials are suggested to Alzheimer's Disease Research at Mayo Foundation or to the donor's choice.

"A lady in Arizona has found some of your family's personal papers. Her name is Brittany Darus, she posted on Facebook. Attention friends and family in Tucson. Maybe a year ago I bought what I thought was a 3d puzzle from goodwill. Well today I opened the box and it was full of someone's family papers and pictures, some dating back to 1911. There were also 2 bibles, written in German that someone named Swan Larson got in 1916. I'm looking to get this stuff back to whoever it belongs to, as that's what I would want done for me. There are letters written to a Mr and Mrs. Roy Larson of Tucson,AZ. Please help me find these people and get their stuff returned"