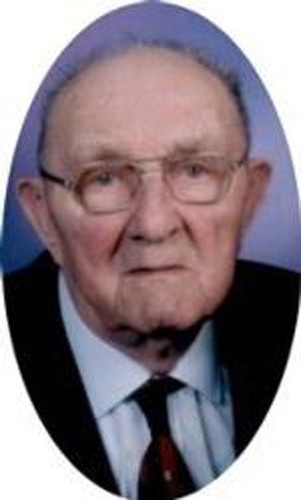 Rochester- A Memorial Service for Morris "Moe" Fenske will be held at Ranfranz and Vine Funeral Chapel 10:00A.M. Saturday January 8th, January 2011. Burial with Military Honors at a later date will be at Oakwood Cemetery. Visitation will be on Saturday from 9:00A.M until the time of Service. Memorials are requested to the family in lieu of flowers. Mr. Fenske died on Monday, December 27th at Samaritan Bethany Heights where he resided the last month.Morris Carl Fenske was born March 9, 1919 in Cascade Township, Olmsted County, Mn. To Carl and Hazel (Finley) Fenske. He lived all his life in the Rochester area. He enlisted in 1941 and served in the Asiatic-Pacific Theater in the Army Artillery until his discharge in 1945. He married Jeanne L. Archer November 3, 1945 in Rochester, MN. He worked on the family farm and then moved in to Rochester in 1972. In Rochester he worked as a Real Estate Broker and later as a custodian at the Rochester Jr. College for several years retiring in 1986.Morris enjoyed fishing with his family and friends, Playing cards and Golfing. He was a member of Bethel Lutheran Church, the Rochester VFW, the American Legion and the Eagles Club.He is survived by his wife, Jeanne; sons, Robert C. Fenske of Byron, MN, Steven R. Fenske Sr. (Jan) of Custer, Washington and Richard D. Fenske (Diana) Fenske of Rochester, MN; grandchildren, Steven Fenske Jr. (Stacey Mc Roberts), Michael Fenske (Melissa), Christine Gikas (Matthew), Stacie Fenskeand Mattie Decker (John) who was raised by Moe and Jeanne; 8 great grandchildren and many step-grandchildren; sisters, Gwen Jederberg of Las Vegas, Nevada and Jerine Racouillet of CaliforniaHe is preceded in death by a brother, Durwood Fenske and an infant brother.Ranfranz and Vine Funeral Home 5421 Royal Place N.W. Rochester, Mn. 55901 (507)289-3600 www.ranfranzandvinefh.com