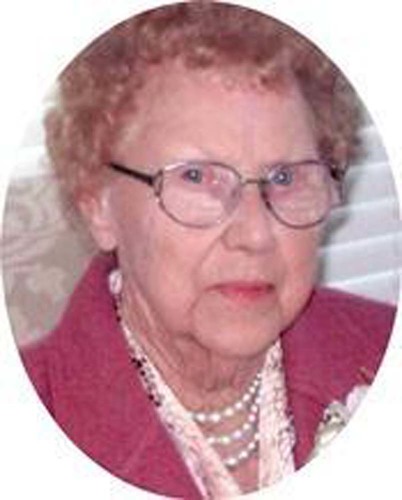 Lila Victoria Larson, 95, of Rochester, died Monday, March 7, 2011 at Golden Living Center Rochester East.She was born October 16, 1915 in Duluth, the daughter of Axel and Hulda Eklund and grew up in the West Duluth area. She married Harry S. Larson on November 16, 1940. They lived first in Minneapolis, then returned to Duluth for Harry to work in ship-building during the pre-war and early World War II years. Lila was first of all a wife and mother, moving and setting up home-making according to where Harry worked, from Duluth to St Louis Park in 1952 and then to Rochester in 1959 when Harry became manager of the Rochester Professional Instruments Company shop. She joined the Rochester Methodist Hospital Auxiliary (then "Pink Ladies") in 1969, working with and often chairing the "Bargain Basement Bunch," as well as attending to various desk areas. In 2008 Lila was recognized for 8,000 accumulated hours of service; she was the first to reach the 8,000-hour milestone since the Auxiliary was organized in 1954. She reached 9,500 hours in 2001 before she became inactive for health reasons.Lila loved being with her family and kept in touch with grandchildren, great-grandchildren, siblings, and nieces and nephews through cards, letters and visits. She welcomed and cooked for many out-of-town family visitors and, when weather permitted, made it a picnic in her much-loved back yard. She loved being a grandmother and great-grandmother and initiated many family holiday traditions; every major or minor holiday, birthday, school or church event, band concert and recital were worthy of a celebration. She also enjoyed reading, crocheting, gardening and playing cards.Lila's husband of 70 years preceded her in death on December 16, 2010, as well as her daughter Beverly Sorenson in 2009. She was also preceded in death by her parents, sister Olga Nelson, and brother Carl Eklund.She is survived by her children Jan (and Bob) Aaker of Rochester, Minn. and Dennis (and Barbara) Larson of St. Peter, Minn.; son-in-law Robert Sorenson of Cape Coral, Florida; grandchildren Joanne (and Mitch) Wayne of Wisconsin Rapids, Wisconsin; Tom (and Lorrie) Ellstrom of Austin, Texas; Cathy Ellstrom of Crystal, Minn.; Debra (and Todd) Rasmussen of Bourne, Texas; Cindy (and Alan) Blair of St. Paul, Minn.; Kersten (and Lyle) Hoffman of Brooklyn Park, Minn.; Todd (and Jennifer) Vandal of Lubbock, Texas; Scott Vandal of Ft. Lauderdale, Florida; 15 great-grandchildren, her brother-in-law Roy (and Carol) Larson of Tucson, Arizona, and many nieces and nephews.There will be a funeral service at 11 a.m. Saturday, March 12, at Ranfranz and Vine Funeral Homes Chapel. Visitation will be one hour prior to the service. Burial will be held in Oakwood Cemetery in Rochester. In lieu of flowers, memorials are suggested to Alzheimer's Disease Research at Mayo Foundation or to the donor's choice.Ranfranz and Vine Funeral Homes, 5421 Royal Place N.W., Rochester MN 55901. (507) 289-3600 www.ranfranzandvinefh.com

"Denny & Barb we are very sorry to learn of your Mom's passing, We had also missed seeing that your Dad past as well. They were both great people, and helped us get through some interesting times, I'll never forget the April Fool we pulled. We have relocated to Victor ID, hope you will drop an e-mail so we can catch up We'll have you in our thoughts. Dave & Nancy"