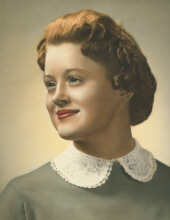 Phyllis Hickman, 74, of Conrad, IA, passed away with all of her family members gathered around her on March 9, 2015 at Oakview Nursing Home in Conrad. Funeral services will be 10:30 a.m., Friday, March 13, 2015, at First Presbyterian Church, in Conrad. Visitation will be 5:00 p.m. to 7:00 p.m., Thursday, March 12, 2015, at First Presbyterian Church, in Conrad The Conrad Chapel of Anderson Funeral Homes has been entrusted with the arrangements. Further arrangements are pending at the funeral home. Online condolences may be sent to www.andersonfhs.com.


Phyllis was born September 16, 1940 in Waterloo, IA to Woodrow Wilson and Helen (Higar) Saint. Pyhllis spent her childhood days in Dows, IA. She attended school in Dows and Steamboat Rock and graduated from Steamboat Rock High School in 1959. Phyllis was united in marriage to Norman Hickman on June 12, 1959 at the Ivester Church of the Brethren in rural Grundy county. To this union five children were born; Harlan, Norma, Anita, Teresa, and Janine. They raised their family in Conrad. In 1983 they moved to the family farm and returned back to Conrad in 1998. Phyllis was primarily a stay at home wife and mother. She was a member of Blue Star Mothers and spent many hours doing volunteer work at the Iowa Veterans Home. For many years, she took great pride in baking goodie boxes and shipping them to the troops overseas at Christmas time. Phyllis was an outstanding cook and collector of many great recipes. She was known as the casserole queen, and at every family gathering never forgot to bring something made with jello.

Phyllis will be deeply missed by her husband of 55 and a half years, Norm, five children; Harlan Hickman of Conrad, Norma Powers of Ottumwa, IA, Anita (Ed) Poland of Iowa Falls, IA, Teresa (James Dale) Bellus of Rhodes, IA, Janine (Carey) Nehring of Newton, IA, thirteen grandchildren, nineteen great grandchildren, and a brother, Jim Perry of Mesa, AZ. She was preceded in death by her mother and father; and stepfather, Fred Perry; her beloved sister Marilyn and brother-in-law Keith Norris; and half-sister Sherry Karbowsky.

"Phyllis Hickman Norman & family : Just received the notice that Phyllis has passed away. You are all in my thoughts & prayers. Brings back lots of great memories of all that went on at school. We did have a good time. And as far back as I remember Norman was always her special guy. So happy you two had so many years together and what a good caregiver you always was. I know how special your 50th Anniversary was for both of you. Thinking of all of you & send my Love Ruth Huisman"

"So sorry to read that Phyllis passed away. Pkease know that you are in our thoughts and prayers. Barry & Denise Hoy"

"Teresa and family, I"am so sorry for your loss. Whenever I would see your mom she was always so friendly. I know she will be greatly missed. Wendy Thomas"