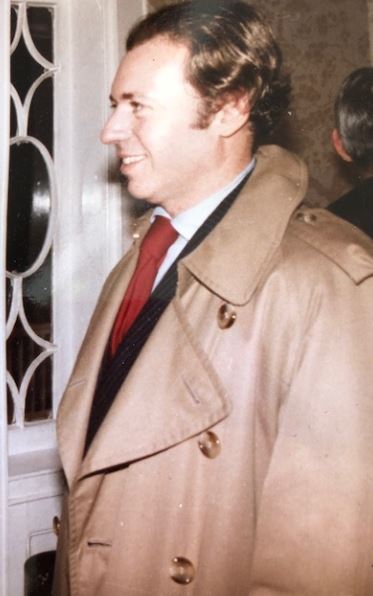 After a long and courageous battle with illness, Peter Lawrence Larkin, former Foreign Editor of CBS News, passed away early New Year's Eve with his family around him. He was 76 years old. As a young boy in New Hampshire, Peter was raised by parents Myrtle (Harriman) and Sydney Larkin, alongside his uncle and aunt Ralph and Mona (Harriman) Whittemore and their children. His fondest memories were of life in and around Peterborough NH, where he often vacationed. His famiIy later moved to Massachusetts, where Peter was an outstanding high school athlete, quarterback of the football team and a star pitcher for his baseball team. His talent and passion for baseball led Peter to play for the semi-professional Cape Cod Baseball League. He studied at Brandeis University, and then in Paris. His love of French was lifelong, and he strove to perfect the language throughout his life. A proud moment was while in conversation with Air France attendants, they mistook Peter for a native-born Frenchman.

A car accident sidelined his baseball career; Peter's new calling was to become a foreign correspondent. His mission was to help Americans better understand events abroad and their impact on the U.S. He worked at UPI and at CBS News as a war correspondent in Vietnam and during the Indo-Pakistani war. Life-threatening battlefield wounds he sustained in Vietnam left him with lifelong injuries and intense chronic pain. Despite this, Peter continued to work tirelessly in the news field for 20 more years, first for CBS News anchor Walter Cronkite and later Dan Rather. Peter rose from foreign correspondent to London Bureau Chief, and ultimately he became Foreign Editor of CBS News when it was the dominant force in national television news. International news coverage directed by Peter won many awards and accolades.

To offset the hectic pace of the highly competitive news business, every day Peter swam a mile at the New York Athletic Club. He cherished the NYAC, which was just a few blocks from CBS News. Not surprisingly, Peter made sure he lived right by the club - his second home -- for more than 50 years.

Peter married late in life to another journalist, Ellan Cates, and they had one child - daughter Brett Elizabeth Larkin. This was a pivotal change in Peter's life, and he dedicated himself to his daughter. He became her Little League coach, her swim instructor, and taught her how to understand mortgage calculations in primary school. He urged her to pursue entrepreneurial dreams even as a child. He created a weekly newspaper, and sent it to Brett throughout her summer camp experiences. At this time, Peter himself was pursuing entrepreneurial ventures in NYC real estate investment, Eastern bloc businesses and most passionately, distance learning - even before the internet was created. Always a visionary and strategic thinker, Peter predicted many of the trends that have now become essential to our lives.

Earlier this year, Peter moved to the West Coast to be close to his daughter. She indeed had become a very successful entrepreneur, as well as wife to a brilliant and kind man, Jakub Oktawiec, and new mother to adorable baby Alexander. Peter was most proud of the way Brett balanced each aspect of her life, and he valued every moment he had with her beautiful young family.

Peter fought courageously to lead a robust life for 5 decades, despite debilitating pain. With his passing, his family is secure in the knowledge that Peter knew how much he was loved. It is a blessing for Peter and all who love him that he is finally free from pain.

Besides his daughter Brett and family, Peter leaves his much-loved sister Lynne Larkin, his beloved cousins Gail Sawyer and Judith Whittemore and his former wife Ellan.

Rest in Peace, Peter. You will be missed but you will never leave our memories.

For those wishing to remember Peter with a memorial contribution, in lieu of flowers, the family suggests a donation to the Chatham Anglers team of the Cape Cod Baseball League:

"Some years ago I was looking through a scrapbook I made during high school and I found a movie ticket stub with Peter's name. "My first movie date." He was always kind and thoughtful. I was hoping he would be at our 60th reunion coming up soon. What a distinguished career he had. RIP, Peter."

"Ii was saddened to hear of Peters passing.i grew up with Peter on Cape Cod and was close friends with him throughout our high school years.i played baseball with him as well as working the retail counter at Baxter' Fish Market.i was looking fo Peter to tell him of our 60th high school reunion which he always attended in the past.when i found his obituary.He was a great guy and will be missed by all whi knew him Kevin ONeil Mashpee,Ma 02649"

"I have happy memories of a friendship with Peter when we worked together at The CBS Evening News. Thank you for posting his full background. An interesting life, indeed. RIP, Peter. Carol Ross Joynt"