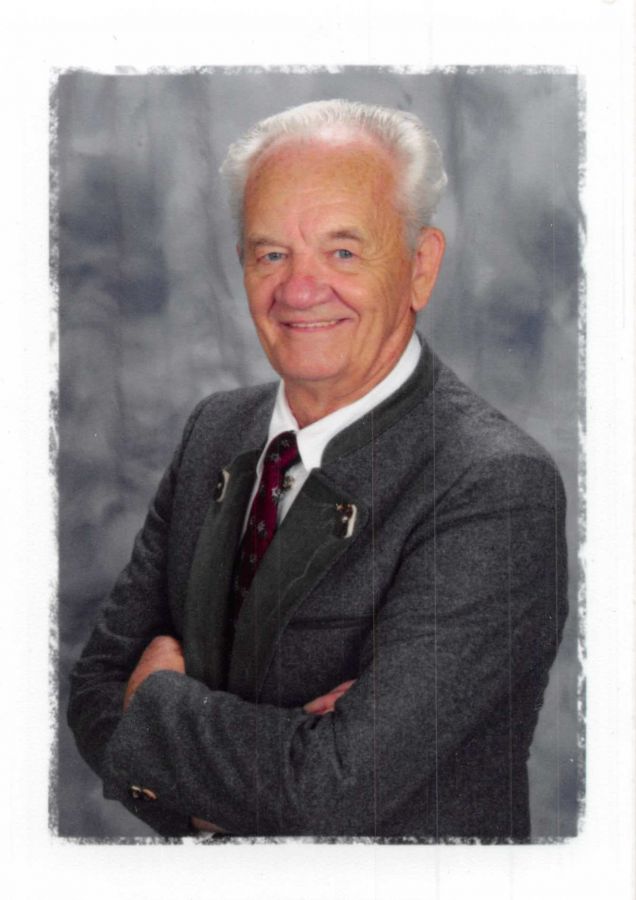 Arnold Otto Gustav Bieber, was born August 28, 1935 to Auguste Ida (Kalina) and Otto Gustav Bieber in Farienen Ostpreuseen, now a part of Poland. Arnold immigrated to the United States in October of 1957. He was sponsored by his aunt, who was living in Chicago, Illinois. New to the country, he was drafted into the US Army in July of 1958. Arnold served two tours of duty and was stationed in Ft. Sill, OK and Ft. Hood, TX before his honorable discharge in 1964.
He eventually returned to Chicago where he met his wife, Gwen. They were married on June 10, 1972.
Arnold worked in the metals service field and was transferred from Chicago to Tulsa, before retiring in Philadelphia. Upon retirement, Arnold and Gwen made their home in Broken Arrow. He retired in 1997 after a 30 year career as a salesman, purchasing and inventory control manager.
He was a very active member of the German American Society of Tulsa (GAST), currently serving as the President of the German American Society Arts Association. He and Gwen were members of the Tulsa-Celle City partnership where they hosted numerous visitors from Germany, and volunteered at numerous Cultural events in Tulsa.
Arnold was a loving and devoted family man. He and Gwen were blessed with a wonderful 47 years of life together. He enjoyed spending time with all his family, especially his grandchildren and great grandchildren.
Arnold passed away June 14, 2019. He was 83.
He is survived by his loving wife, Gwen Carol Bieber; daughter, Angela Joy (Bieber) Bunyard and husband, Ron; his wife's children: son, John Bruce Patton, daughters, Marcia Waugaman and husband, Jim, Linda Miller and husband, Gary, Laura Steeley and husband, Don; seven grandchildren and two great grandchildren.
Arnold was preceded in death by his parents; grandson, Paul Enoch Steeley; great grandson, Rowen Eugene Halferty; and two brothers who died during infancy.

"I am so sorry to her of Arnold's passing. I always liked and admired Arnold for all his tireless work and dedication to the German American Society. He was a true gentleman, dependable, intelligent and served his position of chair of the GAST Art committee very well. He will be sincerely missed. My sympathies to Gwen and his family. "

"It is with a heavy heart,that we bid farewell to a man, who was a great supporter and friend of our Tulsa-Celle City Partnershipin so many ways: as President of the German American Society of Tulsa, ad advisor and host of programs for visitor from Celle and as President of the German American Society Arts Association. We will miss Arnold deeply. We extend our personal condolences to his wife Gwen and hope, that our friendship will be a source of strength, consolation and optimismin the days to come."

"Dear Gwen and family, so very, very sorry to hear of Arnold's passing. He represented GAST so well, and you may not remember me, but both of you were so friendly to me, I will not forget. Please accept my condolences, Mary Bode (widow of Guenter)."

"It's hard for me to believe my good friend Arnie is gone. Even though we were far apart geographically, we still kept in touch. I always looked forward to his E-Mails. I will miss him. He was one of the finest people I've ever known."

"So sad to hear this. Arnold was so kind and gracious. First met him years ago helping build a structure at the Celle Sister City booth at a Tulsa Global Alliance Kid's World event. Of course he offered to trade me his power drill and use my hand powered screwdriver. Always a favorite to visit with. We will all miss him. So nice."

"So sorry to hear about Arnie's passing. Arnie was such a nice person. I worked with Arnie at Edgcomb Metals. He was always there to help you when you needed it. "

"A true Gentle Man. An honor to have known him. He will be missed by many."