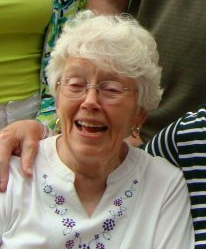 Patricia Sanders Reid, age 86, of Fort Smith, Arkansas, passed away at Mayo Clinic St. Mary's Campus on August 3, 2019. Her children and grandchildren held her hands and surrounded her with loving memories and prayers during her last hours.
Pat was born on April 30, 1933, in Newport, Vermont to Robert and Hazel (Griffin) Sanders. As the youngest of three children, she was called "Patty". She attended East Hartford High School in East Hartford, Connecticut and graduated with an Associate of Arts Degree from Vermont College in 1953, where she met her future husband, Benjamin H. Reid, Jr.
Pat and Ben were married on June 26, 1954. While she worked in a variety of administrative positions, Pat raised three children with her husband Ben. She was a pillar of strength for her family, as Ben pursued his entrepreneurial activities that took them to Fort Smith, Arkansas, where they lived for 35 years. Pat and Ben moved to Rochester, MN, in 2017 to be close to her family. Pat enjoyed her work as a volunteer, coffee and cards with friends, holidays and activities with her family, world travel with her husband, and leadership activities at the First United Methodist Church in Fort Smith.
Pat was preceded in death by her parents, brother Eldon Sanders and husband Ben. She is survived by her three children, Joel (Kim) of Rochester; Carol of Rochester, and Steve (Joe) of Jenks, OK; 5 grandchildren, Chris Reid, Becca (Josh) Mohs, Shane Turner, Jace Reid, Eva Reid and 2 great-grandchildren, Aiden Mohs and Lily Scott; and her sister Jean (Paul) Anderson and sister-in-law Dorothy Sanders.
A service to honor Pat will be held at 2:00 p.m. on Saturday, August 10 at Ranfranz Funeral Home (5421 Royal Place NW Rochester, MN) Visitation will take place a half hour prior to the service. Burial will take place at Fort Snelling in Minneapolis, MN. Memorials may be made to the Alzheimer's Association.
Ranfranz and Vine Funeral Home is honored to be serving the Reid Family. To share a special memory or condolence please visit www.ranfranzvine.com