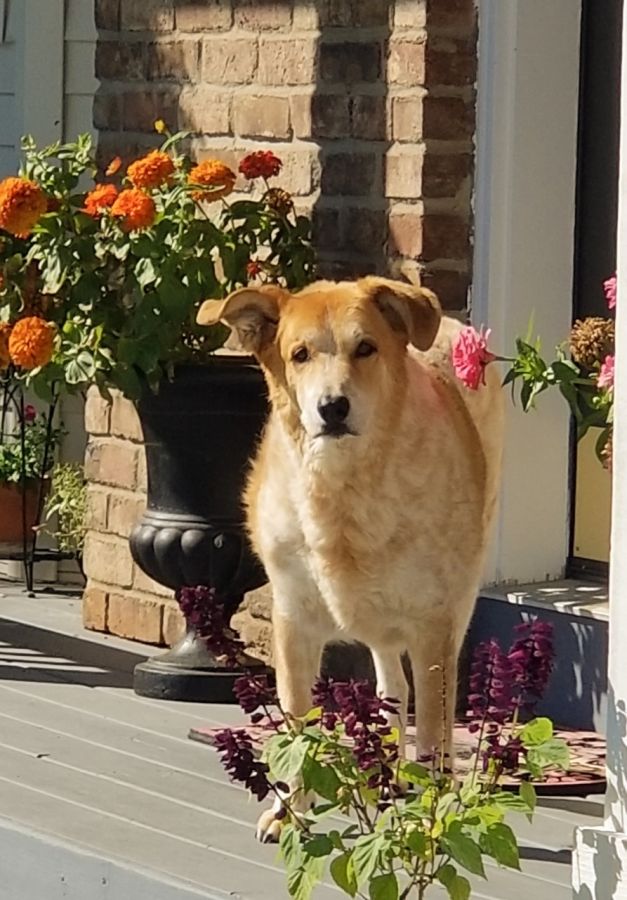 Jack was born in the Souris River Humane Society in Minot, ND somewhere between 2004 and 2006 (memory is vague) along with his siblings to a Blue Heeler mother. He initially had a plague of skin mites and ear infection that lead to numerous medications. Once he arrived at his new home, he was greeted by a big brother Golden Retriever (Tanner). Jack would follow Tanner around everywhere like a little sidekick. Tanner loved fetching ball, so Jack would run along side happy to be part of the action. He even would hang off Tanner's ear to slow him down to keep up. Jack received his name a few months after I adopted him (originally named Chunky, because he ate all of the puppies' food). He was a destructive pup that would go as far as eat through the wooden fence to escape the yard to attempting the same tactic on the drywall in the house. I was fed up and named him Jack Ass.

Over the years Tanner became ill with an unknown condition. Jack could sense that his buddy was sick and would lay beside him in his final days. Once Tanner went to fetch ball in the everlasting field in the sky, Jack took on a new personality. I always look back and thing of tanner telling Jack (in the voice of Shadow on Homeward Bound) "you need to take care of our owner and be a good dog". I say this because Jack was a new dog! He stopped destroying everything in sight and started to listen. Henceforth Jack would be known as a "good boy".

Jack loved people and would come up and greet anyone. You should beware if you were wearing black pants, because he would mark you with his cloud of hair. In 2010 he met his new mommy Kristine. She was sitting in the floor of my bedroom doing her makeup in a mirror, when Jack came up and laid on her lap. Not having much experience with large dogs, Kristy didn't know what to do. I had to explain that for some reason jack thinks that he is a small lap dog. From then on, he attached to her and elected her as his new favorite person. Kristine and I have moved a few times and Jack was happy to tag along. My life with Kristy was a new life for Jack.

Even though Tanner was an avid fetching champion, Jack was less interested in making the effort. Seemed as though Jack wasn't interested in normal dog extracurricular activities and couldn't find his fun zone. That is until his summer with Chris Smith. Chris was Kristine's cousin that only had cats and wasn't inclined to pay much attention to a large dog. Chris however befriended the one and only big dog that warmed his heart; Jack. One summer the family took the pontoon over to the local beach. Jack noticed a dog jumping off a dock into the lake and fetching a tennis ball. He seemed so enthralled that Chris grabbed a ball to try it out with Jack. Up until that point Jack was scared of the water, and swimming was not his strong suit. After hours of practicing with Jack, Chris molded my dog into a fetching dog, but ONLY in water. On our way back to the house we stopped to jump off of the pontoon and take a swim. Kristy was taking her sweet time to jump in and Chris took it upon himself to assist (kick) her in the water. She screamed as she fell in, and Jack had this super dog mentality that he must save her. A 100lb dog jumping off a pontoon in the middle of a lake is a scary situation. As Jack was swimming to Kristy, she was scared he would drown or at least scratch her up. I dove in to try and lure him back to the boat. Once I grabbed onto him, I placed him up on my shoulder (as I was going under). Chris stayed on the boat to pull him up, while Kristy pushed his back end upward. When all was said and done, Jack was a little humiliated and realized that he wasn't the super swimming dog he dreamed of.

Jack was the Comforter-in-Chief for anyone that was feeling down by laying his head in your lap. Jack was my rock and was always there for me in my times of need. Be it my struggle through the end of my first marriage, or the passing of Chris. Jack always had that ability to lift my spirits. He was a unique character that would snail trail the whole room while grinning. We would say that we knew when he liked someone, because he would come up and burp in their face, grin, and the walk away. Jack (Jacky, Jackus, Grillin Buddy, Big Dog, Big Stink, ....) was by best friend, and we all will be lost without him. At least we know that he his with Chris now as his Grillin Buddy in the sky.