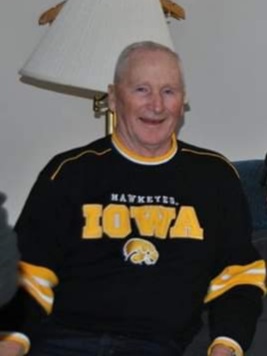 Carol A. Norwood, age 80 of Pleasantville, passed away on Sunday, August 11, 2019 at his home in Pleasantville. Funeral services will be held on Wednesday, August 14, 2019 at 1:00 p.m. at Coburn Funeral Home in Monroe. Burial will take place at Silent City Cemetery. Visitation will take place on Wednesday, August 14, 2019 from 11:30 a.m. until service time. Memorials may be directed to the family and condolences may be left for the family at www.coburnfuneralhomes.com

The son of Guy and Elita (Mills) Norwood, Carol was born on October 6, 1938, in Lynch, Nebraska. He graduated from Lynch High School. He also served in the Army National Guard from 1955 - 1963. On January 8, 1959, he was united in marriage to Joan Fernau in O'Neill, Nebraska. There wasn't much that Carol couldn't do. He farmed, worked as an electrician, a carpenter and many other things. He retired from Norwood Electric in 2006. After his retirement, he managed Carrington Pointe Apartments in Fairfield, retiring in 2017. Carol was an avid Chicago Cubs, Iowa Hawkeyes and New England Patriots fan. He also helped coach Little League for Brian and some of his grandchildren.
Those left to honor his memory include his wife Joan; children, Cynthia (Bill) Maddison, Neil (Denise) Norwood, Brian (Carol) Norwood, and Brenda (Denny) Maddison; 10 grandchildren, Ashley (Josh) Duplechin, Andrew (Kaitlin) Norwood, Ryan Maddison, Joshua Maddison, Ridge (Jerena) Maddison, Bradley (Olivia) Norwood, Tyler Norwood, Brooke (Matt) Weir, DJ Maddison, and Drew Maddison and seven great grandchildren. Also surviving is a brother, Carmen and a sister Ina Belle. Preceding Carol in death were his parents, brothers, Wallace, Urelle, and LaVere and a sister, Ina Marie Anderson.

"Brian, Carol, and Family. My sympathies to you all during this difficult time. God bless. Brad Vos"

"Neil and Denise, I?m thinking of you at this difficult time. "

"Neil and Denise, I?m thinking of you at this difficult time. "