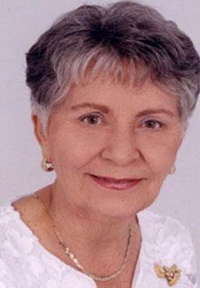 Gerry was born on Christmas day 1930 in Davenport Iowa the second of 5 children to Ruth and Ray Hart. She had a wealthy uncle who offered to pay for her college if her parents named her Mary Noel. Instead her mother named her Barbara at birth and her father changed her name a year later to Geraldine.
She grew up in Detroit Michigan. Her father had a successful tool and dye business. While she was in high school her father got cancer. Unable to work he lost his business. The doctors advised the family to move to warmer weather as it would be good for his health. So, Gerry her parents and 5 siblings moved to Ft. Lauderdale where they all lived in a one room efficiency.
Gerry was a straight A student all through school and she skipped a year of high school and went right to college. She had aspirations to become a lawyer. Shortly after enrolling at the University of Florida her father's health declined and being the oldest child Gerry was forced to quit college and went to work to support the family often working several jobs at once.
In 1952 Gerry met Gene on a blind date set up by a mutual friend. They married in 1953 and gave birth to their first of 7 children a year later. Gerry was a fiercely devoted mother who would do anything for her kids and family. Somehow with Gene as a postal supervisor and her as a stay at home mom with some occasional part time jobs they raised and supported 7 children and sent them all to private schools.
After the kids were raised Gerry got her real estate license. Fueled by some frustration for having her goals thwarted earlier in life she channeled her unbridled energy, charm, gift of gab and enthusiasm into her real estate career. She quickly become a huge success in real estate selling more than 5 million dollars per year when the average sales price was $50,000. She opened her own office Gerry Sullivan & associates which quickly became one of the most successful Century 21 franchises in the country. Most of her children were fortunate to work with her in her office and in related businesses over the years and they learned much from her example.
As for her hobbies One of her granddaughters said it best. "I will always remember her soft hands, her kind heart and her love for shopping. She lived to shop. Her birthday was Christmas Day but our Christmas at grandma's house wasn't all focused on her. We had MOUNTAINS of gifts from her, each wrapped carefully in piles for each of us grandkids, there's a lot of us by the way. She got so much joy from shopping and gifting. Christmas won't be the same without her joy. She was a strong, fierce and lively woman who wouldn't slow down. I will always carry her spirit in my heart. I will always know her, share her stories and make sure my kids know what an amazing great grandma they would have had."
Gerry was a kind extremely outgoing person not only to family but to nearly everyone she met. There were few people that she encountered that did not hear about all her kids and soon knew her entire life story. She was well liked and greatly respected by her agents and competitors in the real estate community. She was deeply loved and will be sorely missed by her 7 children and dozens of grandchildren and great grandchildren.
Gerry did not want a funeral or a formal service, so the family is respecting her wishes. There will be a celebration of life party at her son Jim's house on December 1 at 4 PM. Please call Jim at 954 328 9370 for details.