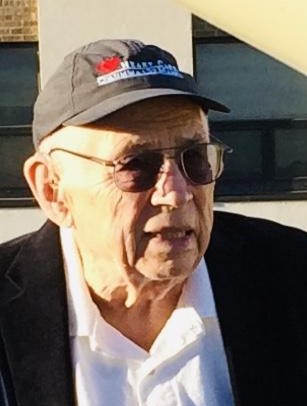 Barteld Richard Siebring was born September 24, 1924, to Katie (Snuttjer) and Richard Siebring in George, Iowa, the youngest of five surviving children: Owen (Betty), Margaret (Albert), Matilda (George) and Irene.
Richard grew up in rural Brewster, Minnesota and graduated valedictorian from the high school there. Being sick in bed the day of graduation, he gave his speech via radio.
Richard went by his middle name because one of his first teachers preferred it to Barteld.
He graduated from Macalester College in St. Paul, Minnesota, where he shared an apartment with his sister, Matilda who was working in the Twin Cities as an artist.
He liked to say that when he graduated from high school he thought he was pretty smart, when he graduated from college he knew he was pretty smart, when he got his Ph.D. he realized how much he didn't know.
He received his Doctor of Philosophy from Syracuse University in 1953.
Richard was drafted into the Navy and was shipped to Japan toward the very end of World War II, officially a commander at a young age. He would comment that he had the sense to defer to the seasoned sailors.
Dr. Siebring taught chemistry at the University of Wisconsin, Milwaukee for over 30 years (teaching more than 20,000 students, all while wearing a bow tie) and authored several college textbooks. "Chemistry: A Basic Approach" was translated into Japanese in 1974.
His nephew, Charles, lived with him for his junior and senior years of college in Milwaukee, and they remained close ever since.
Dr. Siebring also taught chemistry at West Point as part of a civilian oversight program and was honored with the Commander's Award for Civilian Service by the Department of the Army.
He was chairman of the Milwaukee section of the American Chemical Society in 1981.
Known as "Unc" to his nieces and nephews, he was preceded in death by his parents, siblings, their spouses and nephew, John Siebring.
He is survived by his nephews Charles (Patti) Cross of Stoughton and their three sons: Michael (Cire'), Daniel and Samuel; and Michael and Cire's daughter Elsie.
Richard (Laurie) Cross of Brewster and their three children: Gabrielle (Mike), Alexandra and Brennen; and Gabrielle and Mike's twins Emmaline and Franklin, who all live in Chicago, as does Ally. And niece, Kathryn (Mark) Josephson of Red Wing.
All three children are of Matilda and George. He is also survived by his brother's son John Siebring's widow Joyce of Welcome, Minnesota and their three children: Joel, Julie and Jack and their children. Unc liked action movies, walking to work, keeping up on the news and going back for seconds at the heart-healthy buffet.
He died peacefully in Stoughton, Wisconsin, on September 10, 2019, where he recently had taken up residence with renewed vigor of body and mind.
Please share your memories at www.cressfuneralservice.com

"September 15, 2019 On behalf of the Newport Ct. Condominium Association in Milwaukee, I would like to extend our condolences to Dick's family. He lived here for nearly 30 years and was loved by all of us. Dick was an avid walker and would use his walker to do circles around the cul de sac at least once or twice a day. When we backed out of our driveways, it was always after looking to make sure Dick wasn't in our path. He will truly be remembered by all of us with fondness and a special place in our hearts. Helen Dixon - President of Newport Court Condo Association."

"Dear Chuck and the rest of Dick's family: I am so very sorry for your loss. I miss greatly my wonderful "roofmate". Our cul de sac is not the same without his perceptive presence, daily perambulations, and periodic "fireside chats". May he rest in peace after a long life of service. Judy. "

"I was blessed to find and purchase his home on Newport Court when when he moved this year. It's wonderful he lived there as long as he did. It will be my forever home as it was his - after I retire from the Navy that is....wonderful memories expressed in his obituary!"

"We will miss you Professor."

"We will miss the Professor."