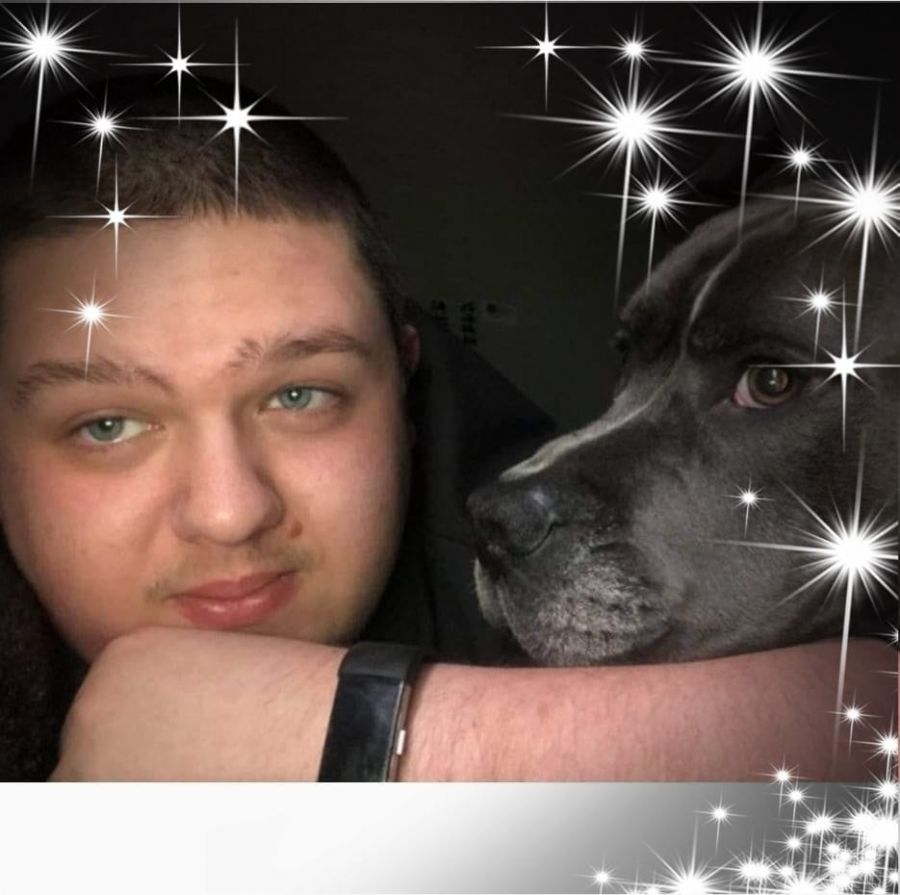 Chandler Lee Fritts was born the morning of March 10, 1996 to parents Larry and Heather. He was a boy who entered this world quickly and a bit ferociously, welcomed quickly by his sister Ashlee who at a young age herself held him in her arms his very first day of life. His grandparents Roberto and Nadine Giron, and Edwin and Shelia Fritts were also some of his first proud visitors to welcome our baby boy into the world.

As Chandler grew, it was thought by many that he was a very old soul. He was one of the kindest little boys you ever met. He loved the earth, every person he met, and every animal and species he came in contact with. He grew to play softball and basketball through the local Boys and Girls Club alongside his coach and good family friend, Donnie White, where he met many friends.

At a very young age, he found a love for the state of Montana where his Papa and Grandma Giron lived. When Chandler and Ashlee were young, the family took many trips to Montana and eventually the kids visited Montana independently each summer. One specific trip, as Papa and Grandma were bringing the kids back into Washington, Chandler was picking at his sister and irritating her, just as all little brothers do to big sisters. Between these two, there was great love shared, and a lot of teasing from little brother. Papa asked Chandler why he did that to his sister, and Chandler's reply: "because I can", which became a family joke anytime Chandler was simply being Chandler. We always thought "because I can". As Chandler got older, he began to spend entire summers in Montana. Papa and he would ride up into the mountains on Papa's four wheeler, fish down the Bitter Root River along with a local fishing guide and his dog Maggie, ride the Harley, and just hang out and do whatever it was that country boys did. Chandler always said one day he would live in Montana...we all believed that would be true.

There is a specific wild and crazy adventure on a Harley ride with these two Montana guys where they turned down the country road to the Giron homestead and were spotted out the side window by Grandma who saw not only the Harley and these two guys, but Papa's oxygen was flying along behind them. As her heart just about dropped out of her body, the two were informed that they were never to ride the Harley alone together, nor go out on their adventures alone. The two family rats, born in the year of the rat on the Chinese calendar, were heartbroken. Grandma felt horrible that she had to put her foot down to these adventures, but she loved them both so much it was something that she knew she had to do for their safety.

As Chandler found a love for the cello, which he played into High School, he also enjoyed trips to Orchestra Camp. Chandler's circle of friends began in grade school through his orchestra years, and on into high school and beyond. Everyone we ever met seemed to love Chandler's giggle, his craziness and his genuine spirit. Chandler loved animals including his childhood cat Dale and corgi Zoro. But as he got into his high school years he really wanted a pit bull, which he even attempted at one time with a bull boxer he named Dasher, however, as the puppy came home and wrestled with Dale, Chandler returned the dog and said he couldn't stay if he couldn't get along with Dale. Dale was his cat. Although we rescued two more corgis, Barnum and Bailey, who were to go on to live with Chandler in his own home as an adult, he had other plans for finding that great pit bull. He eventually located a breeder in Eastern Washington and drove all the way over to retrieve two litter pups, Diesel and Odin. His love for his dog Diesel was unmatched, he often told the family he loved Diesel more than his human family and we all believed it. The two were inseparable and ventured out on many hikes together and with friends.

Chandler met the love of his life, Sarah Van Scoy, at a young age and they palled around through High School (Edmonds Woodway High School), but it wasn't until later that they fell in love. Being the romantic that Chandler was, he planned a secret trip to Maui to propose to his 'baby girl'. And he did so, down on one knee in the sand, at sunset with a black diamond eternity band for his girl and a promise to spend the rest of their lives together. The two had many adventures together with Diesel and friends, and many fun happenings with Ashlee, brother Roger and Lailah who adored her uncle Chandler.

One past time of Chandler's was the holiday season and cracking nuts on Christmas Eve at the home of Grandma and Grandpa Fritts, who always had whole nuts in their shells, with all the cracking devices. Chandler would crack those nuts along with his father, our third family rat, and eat them joyously. Chandler also had a love of steaks and every year on the kids' birthdays, they were able to pick their favorite dinner out. In recent years as Chandler was asked where he wanted to go for dinner, he often replied wherever there's a good steak. We adventured to places like the Keg, Outback and other similar restaurants. On his 23rd birthday, as his mama text him and asked where he wanted to go, unlike in previous years where he always asked for a recommendation, he text back immediately "El Gaucho". He had researched and found El Gaucho to be Seattle's PREMEIR Steakhouse. Our boy was wise, we went and thoroughly enjoyed the evening. But beyond the steak dinner and the El Gaucho Manhattan, I think one of his favorite moments was when they brought the after dinner platter which was full of cheeses, fruits, and a luscious display of whole nuts with all the cracking devices. Although everyone was full, Chandler sat and cracked almost every last nut on that platter. It was a joy to watch him.

Chandler was a prankster and made it his goal to prank his niece as often as he could. That snicker he would express when he was thoroughly enjoying the pranks was memorable. Last Christmas Chandler wrapped Lailah's Lego present into a box, and yet another wrapped box and into yet another and another and another. Caught on video, his niece was quite put out at the age of 5 to open present inside present, inside present, until she got to her Legos. Chandler and Lailah shared an enormous love of Legos and pranks. Lailah was already creating plans for her next prank this Christmas for Uncle Chandler. It was so fun for the family to see these unfold.

Chandler was an adventurous young man, he loved nature, the mountains and quiet hikes, cars with great sound systems and tinted windows, his Harley, and he even found his way into Local 32 the Plumbers and Pipefitters Union in Seattle. Chandler was the 4th generation in our family to join Local 32. He followed in his great-grandfather, Frank Giron's footsteps as a pipefitter and welder like he wanted to be, and his papa - Robert Giron and father - Larry who were both plumbers. Chandler set out to be the best welder. He was friends to many, worked with a variety of contractors who gave great feedback to his work, common comments on his apprentice reviews were that he got along with everyone. Chandler made it into his Second Year Apprentice studying hard and loving the work. He often told others, as he pointed out a building, I worked on that building.

On August 9th 2019, Chandler survived a drug overdose of M30s, (also known as Percs, Blues, Bananas, 512s, Blueberries, BlueTires, Wheels, Rims, M-30s, Kickers, Hillbilly heroin, Greenies, Ercs, and Buttons). Counting our blessings that our boy survived this, we all geared up for what we individually and independently half expected to be the ride of our lifetime. Yet in just one short week, the longest week any of our lives, Chandler once again overdosed in the early morning of August 17th. Both times this was due to this illegal, counterfeit, and highly lethal drug on the market M30s. This tiny little pill is often laced with other drugs including fentanyl, a highly dangerous and addictive drug which has the power to cause an almost immediate death. The morning of August 17th this drug took Chandler's life.

Chandler was a creative and intelligent young man. He was smart beyond his years, knew how to get around just about anything, which also unfortunately provided him the less safe adventures of exploring also. Chandler, like many young men, could be reckless, often fearless, and take life for granted. Like many drug users, he may never have thought his drug would be laced, or "stomped on", but was willing to take the chance unfortunately as he told Ashlee in the hospital after the first overdose. We were all dismayed with his candid take on a Russian Roulette lifestyle we had no idea he was previously pursuing. Chandler did not plan to leave this life in this way, yet our brave, fearless, intelligent young man did. He took chances that he knew were dangerous, but truly we believe, thought he would always overcome the bad ones. This was not the case for our family and we hope and pray that our significant loss may be another family's gain. For anyone we know, their loved ones, or friends who are experimenting with substances, we hope you are all made aware of this highly lethal, illegal and counterfeit drug on the street. Please let Chandler's story strengthen your knowledge.

Chandler was predeceased in death by Edwin Fritts and Roberto Giron (grandfathers); Melanie Giron (great aunt); Jess Biddle (uncle); and Steven Sixkiller (great uncle). He is survived by Larry Fritts and Heather Giron Fritts (parents); Ashlee (sister), Roger and Lailah Harlan; Sarah Van Scoy (fiancé); Shelia Fritts and Nadine Giron (grandmothers); and many aunts, uncles, and cousins who all love him dearly. Chandler will always live on in all of our memories and our hearts. Godspeed little man, sweet dreams little man. We hold your heart in our hearts, now and forever...

"Chandler was one of my best Local 32 buddies. We met at Shinn Mechanical and were in the same class at Local 32. I'd always sit next to Chandler in class and take breaks together. I was so excited this last April when I pulled up to University Mechanical on the first day of apprenticeship rotation, and saw Chandlers truck parked out front of the building. I was so relieved I had my buddy working at the same company as me! I had a few great weeks in April working with Chandler at Facebook. Going out to lunch together at Subway or Flying Saucer Pizza. Chandler loved the Chickenator and Thai Fighter pizza We even started a little Saturday tradition of grabbing a beer at Flying Saucer after work. We hit like 3 weekends in a row before he got sent to another job. It seems surreal to have my friend gone, I always could see us finishing up the apprenticeship and working together somewhere down the line. Chandler will definitely be missed."

"Chandler was such a pleasure to teach. He brightened up my classroom everyday. His unique perspective and style will never be duplicated. Thank you Chandler for being unapologetically you. You will be greatly missed. "

"I?m glad you have all those great happy memories with your son!?? Heidi Pannell"

"Much love to you Heather. And sending peace and strength to the entire family. Hold on to each other and know that all who know you are behind you all. "