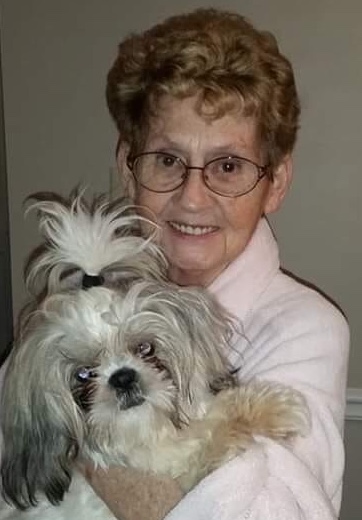 Shirley Ann McGarey (Robson) age 77 of Muskegon Michigan passed away on Saturday September 7, 2019 after ending her year long battle with cancer. Shirley was born to the parents of Robert and Sigrid Robson on February 8, 1942 in Grand Rapids Michigan. She grew up in Muskegon & graduated from Muskegon Heights High School . She married her high school sweetheart Larry McGarey on October 10 ,1964 and was married for 55 years. Shirley and Larry were blessed with a loving family of 4 children ,7 Grandchildren and 4 Great Grandchildren. She was fortunate to have spent her final days with her Husband , children , grandchildren and great grandchildren at her side. Shirley dedicated her life to spending time with her husband ,family & two dogs . She loved going up north to Irons , Mi to visit family when she could & she especially enjoyed traveling to Louisiana to spend time with her nephew & nieces whom she loved very much & kept in contact with until her final days. She is Survived by Her Husband Larry McGarey, Daughter Laura McGarey(Steven Yordy), Son David (Dottie)McGarey, Daughter Susan Williams, Grandchildren Amanda(Eric) Briggs ,Courtney (Tyler) Hawkins, Susan McGarey, Joseph (Christine) McGarey, Karly Williams, Alisha Williams, as well as great grandchildren Kaleb McGarey ,Everett & Greyson Briggs. She is preceded in death by her Mother Sigrid & Father Robert Robson, sister Donna Ryan and Son Robert McGarey.
The family appreciates prayers and condolences but declines any flowers at this time. Any donations should be sent in memory to North Ottawa County hospice Heartwood lodge.18525 Woodland ridge drive, Spring lake Mi.49456. A memorial service will be announced to friends and family at a later date.