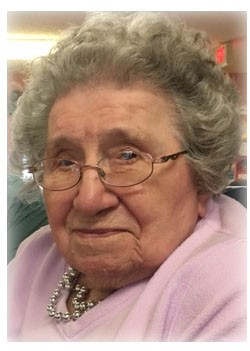 Violet Koudelka, former Antigo resident, currently of West Salem, died Sunday, September 29, 2019, at Mulder Health Care Facility in West Salem. She was 101 years old. She was born on December 20, 1917, in Antigo, a daughter o
Ferninand and Genevieve (Prevratil) David. She married George Koudelka on
July 8, 1937, in Antigo. He preceded her in death on November 12, 1982.

She and her husband farmed in rural Antigo for many years and moved into Antigo after retirement in 1967.

Violet was a longtime member of St. Mary Catholic Church in Antigo and the Western Bohemian Fraternal Association (ZCBJ) Lodge.

She enjoyed baking for her family and helping out at the Dixie making kolaches
and rolls.

She moved to West Salem in 1997 to be near family.

The funeral Mass will be celebrated on Monday, October 7, 2019, at 11 a.m. at SS Mary & Hyacinth Catholic Church with Rev. Charles Hoffmann officiating.
Burial will take place in Queen of Peace Cemetery.