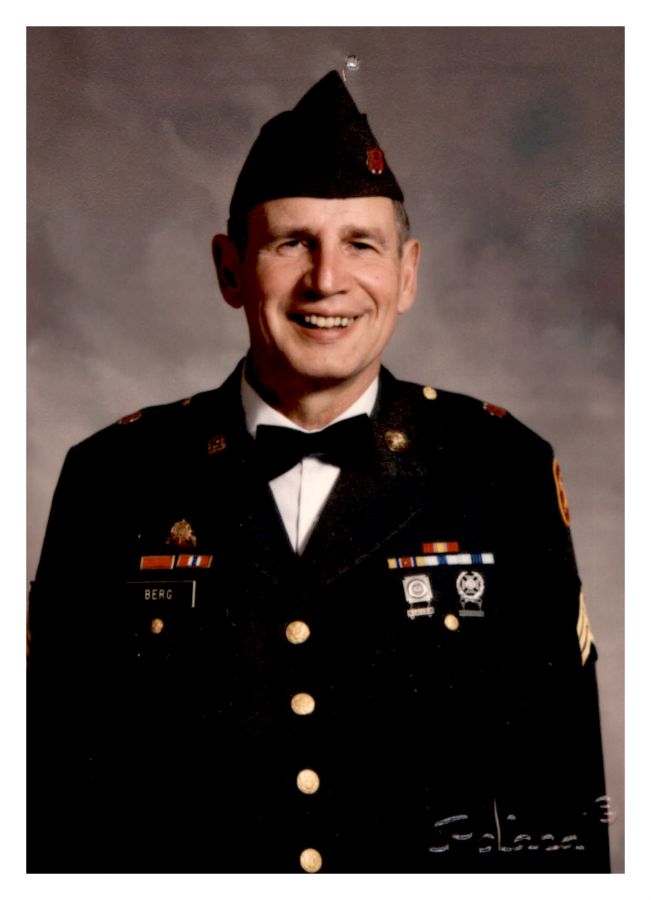 Roger Ervin Berg, 83, of St. Charles died Thursday, October 24, 2019 at Whitewater Healthcare Center in St. Charles. Roger was born December 23, 1935 in Zumbrota to Carl and Esther "Gravelle" Berg. Roger and Sharon Dopita were married on July 7, 1962 in Austin. Roger served in the United States Air Force from 1953 - 1957, serving over seas for one year during the Korean War. He received his GED and went on to graduate from the Military Police Reserves, Army Wheel Mechanic,and Motor Transportation Operator school. Roger and Sharon moved to Wabasha in 1961, where he worked as a police officer until 1966, when they moved to St. Charles where he worked for the St. Charles Police Department. In 1980, Roger joined the United States Army Reserves, Rochester M.P. Company before transferring to Fort Snelling and later to Mason City, IA 1133rd Transport Co. before retiring. Roger worked for the U.S. Postal Service for 20 years in Austin and Winona, retiring in 1997.
Roger was a member of the Rochester and St. Charles Veterans of Foreign Wars Posts.
Survivors include a son Michael (Pam) Berg of St. Charles and a daughter Susan (Jon) Hoefs of Isanti, two granddaughters, Gabby and Chloe Hoefs, a brother Kenneth (Irene) Berg of Mazeppa, and two sisters, Dorothy Berg of Rochester and Karen Garness of Austin. He was preceded in death by his wife, Sharon in 2016 and a brother, Earl Berg.
Services to remember Roger will be 11 a.m., Friday, November 8, 2019 at Hoff Funeral and Cremation Service in St. Charles, led by funeral celebrant Jodi Heim. Burial will be at Minnesota State Veterans Cemetery at Preston. Visitation will be Thursday, November 7th from 5 - 7 p.m. and 10 a.m, until the time of the serviceFriday. Please share a memory of Roger at his online guestbook and view his video tribute at www.hofffuneral.com when it becomes available.
Memorials are preferred to the St. Charles Veterans' Memorial Fund or the Southeast Minnesota Resource Center in St. Charles.

"I was saddened to hear of Roger's passing. I worked with Roger at the Winona Post Office. Roger was always in a good mood and made work fun . I miss Roger. "

"I remember Roger and Sharon would come to visit us back on the farm when I was a kid. I was always amazed that my parents would drink right along with Roger and Sharon as we didn't have lots of drinking at home then. As the nights continued, the stories become more interesting and louder! Theresa Benda (Bradshaw) "

"When Roger was 13, he had his dog trained to run as fast as he could for 50 feet and then leap right into Roger's arms. Dorothy Berg "

"My Sympathy to Roger's family. Having worked with Roger at the post office i was fortunate to get to know him I can say I don't think he ever had a bad day. The fact being he was uplifting to a lot of people. I truly enjoyed the times we were working together. So many stories I remember. Roger, you were one of a kind. RIP. "

"My condolences to Mike, Sue and their families. Roger was a neighbor and a colleague of my Dad on the Police Department. Roger served his community and his country. His family should be proud. May he Rest In Peace."

"Very sorry for your loss. Roger was a very kind man. I always enjoyed when he would stop in Dels cafe back when I worked there. Many thoughts and prayers to all of you. "