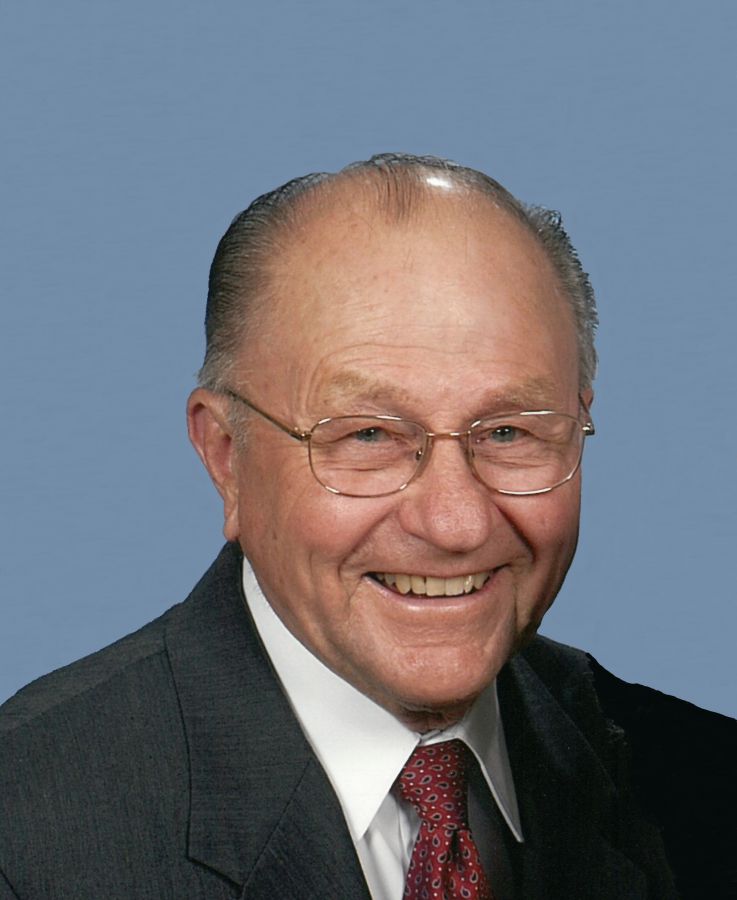 Robert Louis Vohs, 97, of Ames, passed away Wednesday, November 06, 2019 at Mary Greeley Medical Center in Ames, Iowa.
Robert (Bob) Vohs was born September 25, 1922, the son of Hugo and Lillian Vohs of Holstein, Iowa. He attended a country school and graduated from Galva High School in 1940. He enlisted in the Marines Corps serving aboard the Essex, an aircraft carrier in the Pacific. Upon his return from the service, he and Lois Barghols were married on June 5, 1946. They moved to Ames that fall when Bob enrolled at Iowa State College and they lived in a trailer court along with many other returning veterans couples. Bob received his B.S. and M.S. Degree in Animal Nutrition in 1950. Bob and Lois lived in Ames for over 65 years. He was an avid Cyclone fan. Bob and Lois held season tickets for over 60 years.
Bob was employed at the Ames Reliable Products Company during the 1950's, and during that time he was active in the Ames Junior Chamber of Commerce. When the company was sold, he bought an interest in Feed Specialties Company in Des Moines, later becoming the sole owner. During his career in the Feed Industry, he served on the Nutrition Council of the American Feed Manufacturers Association, was president of the National Feed Ingredients' Association and president of the Iowa Grain and Feed Association.
He was an active member of the First United Methodist Church, a member of the Elk's Lodge, the Ames Rotary Club and the Ames Golf and Country Club. In the past, he served on the Foundation Board of Heartland Senior Services. For over 20 years after his retirement he volunteered at the Ames Chamber of Commerce offices and was Recognized by the Ames Tribune as an 'Unsung Hero.'
For about twenty years, Bob and Lois enjoyed spending four months each winter in Peoria, Arizona. They also enjoyed traveling around the United States and abroad. They moved to the Northcrest Retirement Community in 2006.
One of the many joys they experienced in Ames, was at Christmas time, when Bob dressed in his Santa suit and would call on the grandchildren as well as the children of friends, bringing candy and the holiday spirit. Lois always drove the "sleigh' and sometimes was "Mrs. Santa".
Bob is survived by his wife, Lois, son Dick (Sheri) of Urbandale, daughter Barbara Peterson (Marvin) of Huxley, Granddaughters; Laura McGarvey of Iowa City, Beth Phillips (Bryan) of Altoona, Kaitrin Vohs and Margaret Vohs of Minneapolis. Also, Great Granchildren; Jack and Lucy McGarvey and Jacob, Allie, Nevaeh, and Caden Phillips.
Bob was preceded in death by his parents, his brother Harold, his sister Evelyn and her husband Ross Jensen.
A gathering of friends and family will be held from 6:00-8:00 p.m. Sunday, November 17, at Grandon Funeral and Cremation Care, 414 Lincoln Way, Ames, Iowa. A celebration of life memorial service will be held at 10:30 a.m. Monday, November 18 at First United Methodist Church, 516 Kellogg Ave, Ames, Iowa. Burial will take place at Ames Municipal Cemetery.
In lieu of flowers memorials may be directed to First United Methodist Church, 516 Kellogg Ave, Ames, Iowa 50010.
Online condolences may be directed to: www.grandonfuneralandcremationcare.com

"Bob and Lois Vohs are long time friends of my parents, Bill and Betty Waters, and our entire family. A fine man has left us. He will be missed. My condolences to Lois and the entire Vohs family. "

"Lois, Ron and I share prayers for you and your family at this time of Bob?s death and throughout as you continue life. Bob was such a kind and wonderful person. I have such good memories of you both at Holiday Fair. We are in Florida but are thoughts and love are with you and your family. Memories of your move to North crest are vivid too. Hugs to you Lois. With love from Jackie n Ron Smith"

"I always loved our conversations when you two would come to the office. I have greatly missed his visits with me. Please know that you are in my thoughts and prayers. Lori Grant"