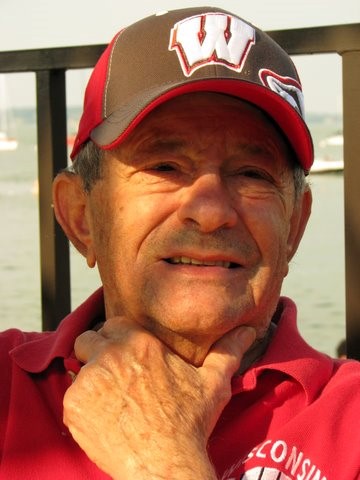 Sam Onheiber, Age 94, of Siesta Key, FL passed away peacefully on Thursday, November 28, 2019, Thanksgiving evening. Sam was born in Madison Wisconsin to the late Bessie and Herman Onheiber. Sam was a wonderful husband, father and Zaide. He is survived by the love of his life, Maria, to whom he was married for 58 years, his daughters, Linda (Jon) Stone and Marissa Onheiber, grandchildren, Dahlia, Isaac and Amira Stone, and Sofia and Juliana Seewald, and many beloved nephews, nieces, and cousins.

Sam's birthplace of Madison Wisconsin's Greenbush "melting pot" neighborhood, was central to his identity as was his World War II Navy service on the USS Franks. After the war, Sam went on to graduate from the University of Wisconsin, Madison and worked for the IRS and then as a Tax Consultant for the U.S. State Department in Latin America before starting a private accounting and real estate practice. Among Sammy's many passions were foremost his family and friends, Madison's Jewish Community, golf and the Wisconsin Badgers, which honored him as the longest season ticket holder.

Funeral Services will be held on Tuesday, 03 December at Beth Israel Center, 1406 Mound Street, Madison, WI at 10:00 am, followed by a burial at Forest Hill Cemetery.

In lieu of flowers, memorials preferred to the University of Wisconsin's Cardiovascular Research Center.

"Dear Maria and family, I was sadden to hear of Sammy's death and thrilled that my brother Artie attended the past service. We Luetke kids have so many fond memories of Sammy and Maria, dear friends of my parents, Bill and Bette Luetke throughout our childhoods and many years after. Thanks to Sammy and Maria, my parents experienced several well-deserved vacations in Mexico, many delicious meals, and opened their hearts to us Luetke kids. I myself came many times as a young adult to the home to visit and hear about your family. I want Maria to know that I have long appreciated her faithful friendship to my Dad as he got older and wasn't very fun to be around. That is a true friend. I love you all and am glad you are all together at this time. Barbara Luetke (bluetke@ymail.com) and on Facebook."

"Sam was always a gentleman. He often told me, how when his mother Bessie, who was elderly, frighten and frail, was force to leave her home on Mound St. because of redevelopment. He asked his cousin and friend, my father Alex London to help. My father asked Sam to have his mother sit in a chair. Then my father picked her up in the chair and carried her safely to her new home . Sharon London"