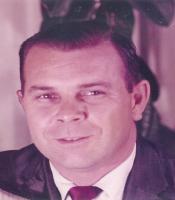 Ernest Richard Perdue- called Dick by family and friends, died on Thursday, July 25, 2013 at the age of 88. Predeceased by parents Ernest Grady Perdue and Carrie Black Perdue, brothers Charles W. Perdue, Hobert S. Perdue, William R. Perdue and sister Odessa Perdue Crews. He is survived by one brother Carl Perdue, by wife Irete Perdue, sons Richard M. Perdue with his wife Dawn in Denison, TX, and Charles B. Perdue with his wife Connie in Austin, TX. 7 grandchildren; Brent Perdue of Austin, Blake Perdue and wife Emily of Austin, Caitlin Perdue of Austin, Tara Hurlbert of Crestview, FL, Ricky Perdue with his wife Cierra, Daniel Perdue of the home, Amanda Perdue McCoy and husband J.D. McCoy of Dallas, TX. Three great grandchildren, Nyla McCoy and Sirye McCoy, and Raelyn Perdue of the home, and one god child Lori Massey. Dick was born on December 9, 1924 in Thomasville, N.C. By the time he was 10, both of his parents had passed away. The older siblings were a high school senior, at college, and nursing school. Dick lived briefly with his fathers brother, but only went to school if he wanted to; but the older children took him to Mills Home, a Baptist orphanage in their hometown, having promised their mother on her death bed to get an education. It was a very unique place. They grew their own food, had the first registered Holstein herd in N.C., their own sewing room and laundry, their school and church. There were more than 500 children. They went to school half a day and worked half a day, then had a two study hall at night. Dick's job was to milk cows twice a day. He especially liked to drive the wagon to the farm to bring back fresh vegetables. He graduated from high school at 16, was given a suitcase and $4 and went to face the world. He worked briefly at a creamery in Thomasville until his oldest brother asked him to come Norfolk, VA, where he worked as a ship inspector's helper until he was drafted at age 18. He served in the army during WWII in the 20th armored division delivering supplies to the frontlines at night in France, Belgium, and Austria. He said they spent three years to catch up with Gen. Patton. After the war, he went to Appalachian State in Boone, N.C. for two years. He wanted to go to Business School and was accepted at SMU in Dallas. So he hitchhiked to Dallas and became a Texan. Delta Kappa Epsilon and became a Deke for life. The same group of men are still great friends and meet for dinner the last Sunday night of every month. After SMU, he worked Varel Mfg. Co. His father-in-law, Alex Magrill had bought a small restaurant on Gaston Ave. and wanted him to manage it. Dick said only if he owned it. Thus began a career that at one time expanded to six locations. He was a successful business man in Dallas and moved to Fannin County in 1972. Since then he ranched for 25 years and also started a peach orchard in the late 1970's. He planted the first Muscadine Grapes in Fannin County. They are the Native American grape. Farming was his first love. At our home on the mulberry road north of Bonham, we have 80 pecan trees, 50 peach trees, some plums, blackberrys, and muscadine grapes. We have also raised 4 grandchildren for 20 years. They all played soccer, basketball, and baseball, and the boys played football. We had a blessed marriage for 43 years. He faced death with the same courage he exhibited all his life. To quote Mary Ottea, who has written several articles about his endeavors: "He was an amazing man, and I feel privileged to have known him." A memorial service will be held on august 18, 2013 at 2 p.m. at Holy Trinity Episcopal Church, 7th and Star in Bonham, TX 75418. Visitation will be held on Saturday August 17th from 7:00 to 9:00 at the Parish House of Holy Trinity Church. In lieu of flowers, the family asks that you donate to your own favorite charity, or make a contribution to Bonham Community Ministries in care of Holy Trinity Church, P.O. box 81, Bonham, TX 75418.