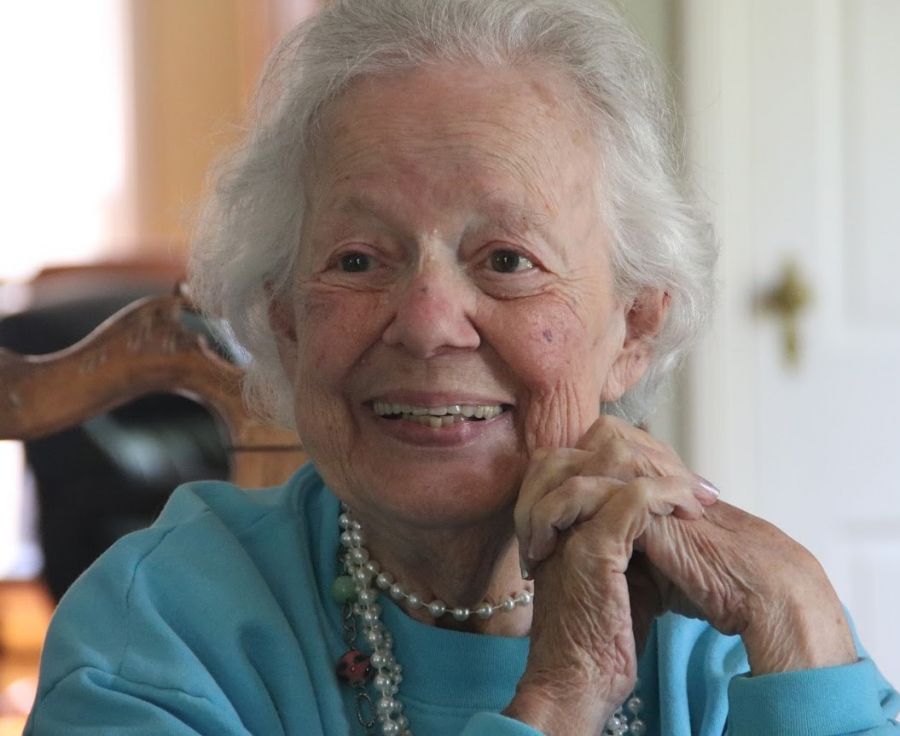 Janet Courtney McShane, 89, passed away peacefully in her sleep at her home, the St. Augustine Home for the Aged in Indianapolis. She was surrounded by her loving caregivers at St. Augustine, who rarely left her side during her final days, and who she truly loved in return.
Janet was born June 2, 1930, in Indianapolis to James Clifford "Cliff" and Marguerite Courtney. The second of three children, Janet was forever the extrovert. As a child, one of her favorite pastimes was recruiting her older sister Joan to play pranks on their younger brother Jimmy. Janet attended elementary school at St. Joan of Arc and later St. Thomas Aquinas School, where she was often recognized by the Sisters of Providence who taught there for her exceptional verbal skills. In fact, her prowess often earned her a special seat next to one of the nuns at mass. She was a 1948 graduate of Shortridge High School, excelling at the many clubs in which she participated, especially Junior Vaudeville. Janet enjoyed one wonderful year at Purdue University, finding the social life in West Lafayette more to her taste than the classroom.
Janet was rescued from what she always said was an uncertain academic future at Purdue when she was whisked off her feet by a childhood sweetheart, John F. McShane, Sr., with whom she enjoyed 30 years of marriage. Although their marriage ended in divorce, their union produced seven children, a handful of pug dogs, at least one Lhasa Apso, a Golden Retriever, and countless cats and kittens. Her door was always open to her children's many friends, some of whom stayed longer than others. She was adored by them all.
Janet's busy family life was matched by her busy civic life. She was a long-time member of the Children's Museum Guild and one of the creative hands behind its first ever Haunted House in 1964. The older McShane children often joined her each year to help, as she said, "scare the bejeezus" out of the unwitting children who ventured in. She was a member of the Junior League of Indianapolis. She was an active and lifelong member of St. Thomas Aquinas Church, overseeing countless rummage sales, CYO fundraisers, bridge clubs, and potluck dinners. In her younger years, she enjoyed attending the Indianapolis 500 Mile Race with friends and family and accompanying her father to his many events at the Indianapolis Athletic Club. She also served as a Democratic Precinct Committeeperson.
In the early '70's, Janet was part-owner with her dear friend, Kathleen White, of a gift shop in Broad Ripple called The Dandylion, where the two made by hand a large number of the artisan gifts sold there. During these years, the McShane family basement looked more like Santa's Workshop, as the two would craft hand-cut and painted wooden ornaments with the help of their home-grown child labor. To this day, Janet and Kathleen's personalized football players can still be found on Christmas trees scattered across Indianapolis.
Janet returned to work full-time after the birth of her 7th child, when her love of politics led to a new career. She worked on staff at the Indiana House of Representatives from 1970 to 1979. She was a secretary/typist in the Minority and Majority Attorney's Offices and the Assistant Principal Clerk. Perhaps somewhat ahead of her time, she was an advocate for the Equal Rights Amendment. In 1980, she joined the Indiana Coal Council as Executive Assistant. After a brief stint with retirement, Janet answered the call to public service once again and joined the staff of Lt. Governor Frank O'Bannon in 1995, and later, Lt. Governor Joe Kernan in 1998. She was a favorite of the young staff and legislators and never turned down a constituent with a question. Janet was a two-time recipient of the prestigious Sagamore of the Wabash, which at the time, was the highest award a governor could bestow on a citizen. But she said one of her proudest moments in her career was having received a perfect performance evaluation from Lt. Governor Kernan in the year leading up to her retirement.
Janet was happiest when surrounded by children--her children, her grandchildren, her greatgrandchildren, the visiting school children who frequented St. Augustine and the parades of friends, neighbors and co-workers who would bring their children to visit her. Second only to Baptism, an audience with Janet was a rite of passage for a new baby for friends and family who were drawn to the love and affirmation she would share.
Janet is survived by four of her seven children: Betsy Schmutz (Jerry), John McShane (Katy), Patrick McShane (Stephanie) and Maggie McShane (John De Souza); eight grandchildren: Ben McShane (Cindy), Sally Dunn (Matt), Jennifer Pritchard (Phillip), Emily Gebhardt (Ben), Jack McShane, Frank McShane and Hugh, Harry and Rowan Hasler; five great grandchildren, and one on the way, as well as a cast of adoring nieces and nephews and great nieces and great nephews. She was preceded in death by her parents, her best friend and sister Joan Courtney Beal, her brother James C. Courtney, Jr. and the source of her greatest heartbreak, her three children, Daniel, Christine and Kevin McShane. Thoughts of her long-awaited and joyful reunion with them has been our consolation.
The family wishes to extend our thanks to the Little Sisters of the Poor and the self-less, loving and dedicated staff at the St. Augustine Home for the Aged. Janet called it her "miracle place" and she both lived and died there with dignity, surrounded by love.
Visitation will be held Friday, February 14th from 3:00 p.m. to 7:00 p.m. at Crown Hill Funeral Home and Cemetery at 700 W. 38th Street, 46208. A Mass of Christian Burial will be held on Saturday, February 15th at 10:00 a.m. at St. Thomas Aquinas Catholic Church, 4600 N. Illinois Street, 46208
Memorial Contributions may be made to the St. Augustine Home for the Aged at 2345 W. 86th Street, Indianapolis, IN 46260 or the Daniel C. McShane Endowed Scholarship at Brebeuf Jesuit Preparatory School, 2801 W. 86th Street, Indianapolis, IN 46268.

"Maggie, I was saddened to learn of your Mother's passing.   Please know that I always called her Mrs. McShane (she said call her Janet but I never did).  She really meant a lot to me during my early days in Indiana politics.  She was always friendly, gave me advice and most importantly, helped me understand the relationships within the State Capitol.  She was a pleasant voice and an absolutely positive influence on many of us. Please know that you and your family remain in our prayers and that we are all better because your Mom was part of our lives. God bless you and the McShane Family."

"One of the finest human beings I have known or will ever know. A dear friend and a wonderful Lady. She will be missed but never forgotten. Love to all of the McShane family. From the Maguire family. "

"Maggie, we are sorry to hear this. I remember your Mom so fondly from our Loyola days and beyond. What an amazing woman and we are so sorry for your loss."

"Maggie I was so sorry to hear this news. I was very lucky to have Three women in my life growing up. My Mom, Grandma and Mrs. Mac. Your home growing up, was like my second home. We sure did laugh alot."

"Oh how I will miss you sweet Janet McShane. I have been blessed to have had the honor taking care of you for the past 16 months. You were the first resident I met at Little Sisters of the Poor and you made an impression on me that stuck. You were the sweetest, and funniest person. You never failed to crack me up with your hilarious and raunchy sense of humor. I will always think of you when I hear songs from the sound of music, you are my sunshine, and of-course, the infamous ?someone?s in the kitchen with Dinah? Rest In Peace Janet, I love you so much"

"What a beautiful tribute! I have nothing but smiles and a few giggles as I think of your mom. The mere picture of her in my mind and I hear her say so clearly "Hello, Dolly". One of my all time favorite people. Heaven just got way more fun!"