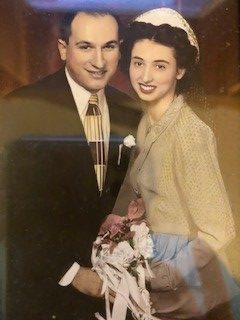 After a long and fulfilling life, Eleanor Kleinfeld Levine, peacefully passed away the evening of Sunday, February 9, 2020 at the age of 92 ½.

Eleanor Kleinfeld was born on June 2, 1927, the 3rd daughter of her parents, Max and Eva Kleinfeld originally of Czestochowa, Poland, but later married in the United States and living in Dorchester, Massachusetts with their young family. Eleanor idolized her two older sisters, Gertrude and Shirley and the three of them could always be found together sledding and ice skating during the winters, on the beach on the MA coast in the summer swimming or going to dances with their friends. Eleanor also had a special bond with her younger brother, Lawrence. The family home was a gathering place every weekend where love and laughter abounded. Eva Kleinfeld was a wonderful cook and Max owned a grocery store and was a butcher by trade. Between the two of them, the food served was always delicious and plentiful. These family gatherings filled with love and laughter each weekend was not lost on Eleanor and she modeled her life in much the same way.

As was the trend for most women coming of age in the 1940's, Eleanor didn't go to college after high school, but prepared herself for a vocational career. She ended up with a prestigious job with classified clearance at the Boston Naval Shipyard, where she was the only Jewish girl working in her department. She was a very social person and gravitated towards making friends with everyone, but her closest friends were those who accepted her cultural and religious differences.

Dating during World War 2 was also difficult, as the young men Eleanor's age had either enlisted or were drafted into the military. As a result, Eleanor was always being set up with men older than she was. She didn't like this situation at all, so when her sister, Shirley told her that she needed her to go out on a double-date or Shirley's date would cancel because his best friend just got back from serving in Guam, Eleanor was NOT interested! It would be another older guy for sure and she said NO to Shirley. Shirley was not about to lose a date, so she appealed to her mother with tears streaming down her face. Eva Kleinfeld would make sure that Eleanor would go out on that double date with her sister. Eleanor finally acquiesced, but insisted that the date be a house date because she wasn't going to go out otherwise. They would stay at home, talk and listen to the radio. That was it!

The first thing that Charlie Levine saw when he walked into the Kleinfeld home was Eleanor's petite derriere as she bent over to turn on the radio. She was 5 foot, 5 inches tall, thin and fashionably dressed with beautiful brown eyes and hair. Not only that, she was funny and vivacious. He couldn't take his eyes off of her all evening and listened intently as she told him that she bowled every week at a bowling alley in the area. Though he was five years her senior, it didn't seem to matter and the home date went very well. Later that same week, Charlie just happened to show up at that very bowling alley that Eleanor bowled at with her friends. She was surprised (yet pleased) to see him and she accepted the date that he asked her on. They were married on September 5, 1948. It was definitely divine intervention, as well as Momma's insistence that brought the love of her life, Charlie Levine, into Eleanor Kleinfeld's world.

Housing was scarce after WW2 for all the young men and women coming back from military service, getting married and starting families. Eleanor and Charlie lived with the Kleinfeld's for a few years, helping with the rent and doing chores around the house. Their first daughter, Elaine was born on September 7, 1953. The family of three moved to Sharon, MA, about 25 miles south of Boston. Sharon had been known as a summer resort town, where people would flock to escape the city heat and relax at the town's large fresh water lake, where boating and swimming were the norm. Following WW2, year-round homes were being built in place of summer cottages and resort hotels. Sharon was growing into a town with many young families moving in to stay, not just for the summer. The Levine's bought the model home in a new area being developed a few miles out of town and down the street from a pig farm. They lived on an acre of land in a 3-bedroom ranch home, surrounded by hilly woods and fields, where the neighborhood children would go tobogganing in the wintertime and play softball during the summer. Eleanor would oftentimes say that her happiest memories were spent living on Mansfield Street in Sharon. Second daughter, Phyllis, was born on May 15, 1957.

During this time, Charlie commuted into Boston and worked as a buyer for Radio Shack while Eleanor spent her time raising her two daughters. She was very involved in the sisterhood at Temple Adath Sharon, where she served as an officer in the organization coordinating large fundraising donor dinners to working on community service projects with the brotherhood, in which Charlie was active. Eleanor also volunteered her time in both of her daughters' schools and with their after-school activities as a room mother or helping the girls work on their Girl Scout merit badges. She took her daughters to the Sharon Public Library and made sure that they participated in the summer reading program each year. Once the girls were older, Eleanor studied and earned her real estate sales credential. She worked many years for Earle & Earle Real Estate Company in Sharon, supplementing the family income with sales of local homes. The family never knew who would be coming home to join them for lunch or dinner. When Eleanor worked with prospective buyers, they became family.

Life seemed idyllic in Sharon, but there were health challenges. Eleanor had radiation treatment for acne as a teenager and that treatment caused her to get skin cancer on her nose later in life. She had a number of surgeries to remove the cancer, but the surgery was disfiguring and came just before the family moved to Ft. Worth, TX on June 28, 1970 to follow Charlie's job as a merchandising manager with Radio Shack. The reconstructive surgery continued in Ft. Worth and Eleanor later faced other cancers of the breast, bladder and kidney, successfully overcoming her cancers each time.

The move to Texas was difficult for the entire family as they knew no one in Ft. Worth. Eleanor had to start from scratch making new friends and getting involved in the community while Charlie went to work and the girls went to school. She earned her Texas Real Estate license and worked for S.M. Page Real Estate Company in southwest Ft. Worth. She learned that the way to meet other Jewish women in town was to learn how to play mah jongg, so she abandoned her bridge playing days and went full throttle into mah jongg. This change did the trick and now, she made many new friends and played mah jongg several days/nights each week. She became quite a good player.

In addition to meeting women playing mah jongg, Eleanor became active in an organization called B'nai B'rith Women and was responsible for selling "tribute cards". If one had a special occasion, birthday or anniversary they wished to remember of a friend or relative, they would buy a tribute card. Eleanor would sell them the card, write up their well wishes, condolences or congratulations in the card and mail it to the recipient. To remind the members of this service, she would use her allocated time to give her report to the chapter as an opportunity to "perform". She would dress up as different characters in history or popular culture and talk about how the purchase of tribute cards made a difference in the person's life or the life of the recipient. Her fellow club members looked forward to these "performances" and they became one of the highlights of each meeting. Eleanor set records with her tribute card sales and Charlie loved hearing the stories about how Eleanor made the sales she did.

As Phyllis and Elaine grew older and left Ft. Worth for college and beyond and Charlie retired from Radio Shack, Eleanor and Charlie discovered cruises and enjoyed doing that by themselves or with friends. They also entertained people in their home. They added Steve Blanc and Ronnie Plotkin to their family as sons in law. They visited their children and later children and grandchildren in both Houston and Mission Viejo, CA as often as they could. These visits were always a lot of fun. Eleanor and Charlie had five grandchildren, Jason and his wife Aliza Plotkin, Raymond Plotkin and Scott and his wife Lana Blanc.

In 2011, Charlie and Eleanor made their final move to Houston, TX to be closer to their daughter, Elaine and her family. Both Levines had health problems later in their lives, where they needed to lean a bit more on their children than they had before. The Levines got an apartment at University Place Retirement Community in Houston, ten minutes from their daughter's home. Unfortunately, Charlie's health began to decline and he passed away in September the following year. Eleanor was now alone for the first time in her life and in the beginning stages of dementia. Her daughters took things into their own hands and made sure that Mom was never alone and lived out her life the best that she could in a safe and secure environment. Even in her last years of life, Mom still had that wonderful sense of humor that she always had and she loved being around people. Great grandchildren Isaac Plotkin and Sebastian and Charlotte Blanc were born. It was wonderful to see Eleanor enjoy playing with them by making funny duck sounds and faces.

Mom also loved her Temporary Home Care companions during this latter stage of her life. They helped her (and the Levine daughters) tremendously by allowing Mom to live out her life with dignity and respect, just the way the daughters had promised Dad that they would.

Eleanor's light burned brightly for 92 ½ years until it burnt out on Sunday, February 9, 2020. She lived a long and very happy life filled with laughter, love and lots of kisses from her husband of more than 60 years, Charlie. Eleanor and Charlie are now together again in heaven and as happy as ever! This gives their family a great deal of comfort knowing.

"My sympathy to both Elaine and Philliis both of whom I used to babysit for. Eleanor was a great friend and neighbor in Sharon, Ma. Glad she is with her beloved Charlie now."

"Dear Elaine, Ronnie and Family, So sorry for the loss of your mother, Eleanor. Would love to have met her in her prime as to my thinking, she was a force of making the world a better place for all she touched. We know that you will miss her and wish you many beautiful memories of your parents. Eleanor's biography was touching and a fine example of a life well lived. Thank you for sharing her story with us. Deepest regards, Wanda and Wolfgang"