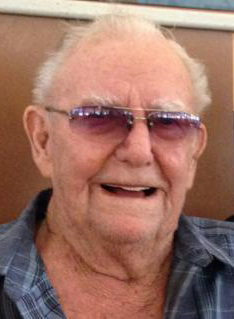 He was born February 2, 1928 in Willard, Utah, a son of Alonzo Jr. and Nora Shepherd Barker.
He attended Box Elder Schools and joined the US Navy serving in Hawaii during WWII. Following his return with the Navy, he married Mona Rae Wood on February 5, 1949. They were later divorced. Then he married Sherry Lee Tripplett in Willard, Utah on December of 1971. She preceded him in death on December 23, 1972. He moved to Florida and spent 26 years there before returning to Utah in 2017.
He was a supervisor for Fife Rock Construction. He also worked on Stauffer's farms and a bakery in his younger years.
Dean enjoyed golfing, bowling, watching baseball, betting with his sister, Ruth, on the games and spending time with his golfing and bar buddies.
Surviving are his six children: Chris Barker; Larry (Jane) Barker; Jill (Brent) Christensen; Quinn (Debbie) Barker; Mitch (Jill) Barker; Suzanne (Scott) Thomas; 17 grandchildren and 14 great grandchildren.
He was preceded in death by his parents, his siblings, Rex, Earl, Harry, Ruth Marrone, Doris Younger, Carl, Edith, one great grandchild and his loving dog companion Rusty.
The family would like to thank Maple Springs Skilled Nursing facilities, Rocky Mountain Home Health and Hospice for their tender care of our father.
A viewing will be held at Gillies Funeral Chapel, 634 East 200 South, Brigham City, Wednesday, February 19, from 11:00 am-12:30 pm. Graveside services will follow at The Willard City Cemetery at 1:00 pm, where military honors will be accorded by the Combined Veterans of Box Elder County. Send condolences to www.gfc-utah.com