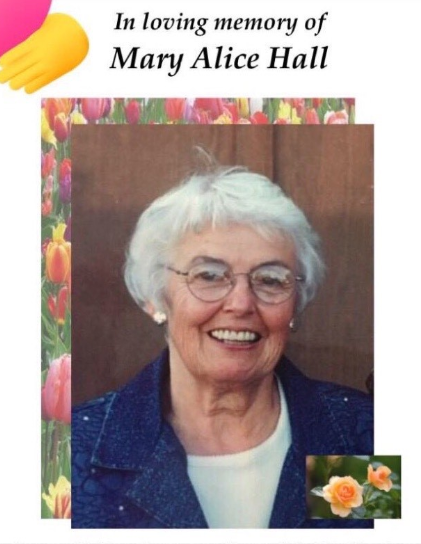 Mary Alice Murphey Stoick Hall (91) passed away Peacefully on February 21, 2020 in Redmond, Washington
Condolences and memories may be shared with the family here.

"It?s been about Five months since your passing and not a day goes by I don?t think about you Mom! Our prayers were answered as the angels came early in the morning on February 21st 2020 and took our dear Mom, daughter and sister to heaven. During these past few years as Mary Alice?s health became more fragile, It was her continued faith and trust in God, that sustained her and all of us. Her faith and devotion to the Almighty Lord was A true testimony to her life for all that knew her and knew what a kind lady she was. A Gentle strength in My life and many others. We Now have another angel in heaven watching over us.???"

"A brief history of Mary Alice's mother. Gladys Julia Freeze was 13 yrs old travling over 3000 miles on a Train and heading to Missoua, Montana from Penobsquis, New Brunswick, Canada. It was 1905 and she would be moving in to the fine home of Anne and Bob Pugsley. In that home she would live with her little cousin Ed (born 4/4/1900 and soon baby Robert Byron Pugsley born nov 9, 1910 Gladys older sister Annie lived in Missoula at 601 Daily Avenue. Anne was married to Bob Pugsley. They had married in 1899 in Penobsquis when Gladys was only 7. Parents to Anne and Baba(Gladys) were Byron Freeze(1846-1903) and Maltida Hall Freeze (1849-1905) Newly orphaned, Gladys was traveled to Montana to begin her new life with her sister Anne and brother-in-law (Robert Daniel Pugsley) Annie Mabel Freeze(Oct. 29, 1873) was 18 years older than "Baba".(Jan. 16, 1892) Baba (Gladys Julia Freeze) was what all her grand children would call her. Baba was the name given to her by her eldest grandson Ron Trosper. Baba came to love Missoula as her new home. The year was 1905 and by 1913 Gladys(21) graduates from the University of Montana with a degree in education. Robert D. Pugsley came to Missoula in 1901, a young man of good education and sound business experience, aquired in Eastern Canada. He has been continuously connected with Missoula's oldest and best known business home, The Missoula Mercantile Company. In 1901 When Robert came to Missoula he was made a clerk in the grocery dept of the Merc. In 1909 he was promoted to Manager of the Retail dept. and since Feb 26th 1919 he has been manager of the wholesale grocery dept. Mr. Pugsley is a vestryman in the Missoula Episcopal Church andis a member of the Missoula Chamber of Commerce In 1919 he sold his fine residence at 601 Daily Avenue and is now living at 202 South Fourth ... Ed Pugsley was 13 when Baba graduated from the U of M Missoula. Baby Robert Byron was 8 yrs old. In 1913 ... She graduates and by 1915 is a school teacher in Manhatten Montana... where she meets Ben murphey who was clerking in a local store. Ben H Murphey married Gladys Julia Freeze on September 28, 1916 in Missoula, Montana however 1920 census says they were living in Cascade County with 2 yr old Byron (born august 12 1918) at the time. I believe about 1922 they moved to Missoula where Dorothy Ann(Feb/4/1920)(born in cascade montana) and Patricia Lou (Jan/23/1925) and Mary Alice (June/1/1928) were born. "

"What an absolute joy to know this lady and have her be a treasured member of our family the past 30 years. We are grateful for her love and acceptance of us and for all the wonderful times we shared together. I thank God that He has her safely tucked away with Him where there is no more suffering or tears . . . and by faith in Christ, we will see her again. Remembering her with much love . . . her husband's oldest daughter, Nancy."

"Mary Alice Murphey was born to Benjamin Harris and Gladys Julia Freeze Murphey on June 1, 1928, in Missoula, Montana. She was the youngest of four children. Her brother, Byron, and sisters, Dorothy Ann and Patricia Lou, were very close growing up and remained close all through the years. Her early years growing up in Missoula were tough since Mary Alice was only seven when her father died. Her brother and sisters helped guide her to adulthood along with a very courageous and graceful mother who always reminded Mary Alice that her father was in Heaven, and she was never alone with the Lord always by her side.  Mary Alice attended Paxson Grade School and graduated from Missoula County High School in 1946. She attended one year at the University of Montana and was a member of the Kappa Kappa Gamma sorority.  As WWII was ending, she met a brother of one of her many girlfriends who, upon meeting Mary Alice, fell in love with her. She would recall of Bob: "Everywhere I went with my friends, there he was!" Bob Stoick and Mary Alice were married in 1948, and while he finished pharmacy school, she was busy as a young wife preparing for their firstborn son, Bradley John. Robert Byron and Barbara Diane followed and by 1960, she had ten and eight-year-old sons and a two-year-old daughter. She would proudly exclaim, ?My children are dearest to my heart.? Mary Alice had a strong faith in God. We clearly remember Mom beginning each day with, "This is the day that the Lord has made. Let us rejoice and be glad in it." Having grown up in the Episcopal church in Missoula, Mom was active with the Holy Spirit Altar Guild and thoroughly enjoyed preparing the church for Sunday services.  PEO sisters were also a great comfort to her, and she remained a PEO all her life. Mom's love of the outdoors started as a young Campfire Girl. When a mother, her favorite vacation was spending time on Flathead Lake with her children.  I especially remember her teaching us how to row a boat.  She would make a special occasion out of a moonlit night rowing under the stars and a full moon. Her knowledge of flowers and birds was incredible, and she would keep copious notes in her bird books when traveling. With her knowledge of bookkeeping, she worked at the family drug store business and later worked in the office at Missoula Manor to be  close to her mother. In 1985, her husband, Bob, passed away and she turned to the Lord for guidance for her future. Four years later, she got a phone call from her brother, Byron, who asked if she remembered his high school buddy, Gene Hall. Thus, began a phone call friendship between Missoula and Seattle resulting in a June engagement and September wedding in 1989. Neither Gene nor Mary Alice had anticipated a second marriage, but God blessed this union, and they enjoyed 30-1/2 years together. Mary Alice moved into his home in Seattle and became a treasured person to Gene?s three daughters and their families. In 2001, they sold their home and moved into a cottage at Emerald Heights. When Mary Alice needed the additional help of ?assisted living,? Gene moved into an apartment in the main building to be near her. In the summer of 2018, they found themselves in close proximity again in skilled nursing following Gene?s stroke in 2018. They maintained their devotion to each other in the Corwin Center sharing meals and continuing to look out for each other. Mary Alice is survived by her three children, Brad, Bob, Barbara and their families; her husband, Gene Hall (age 102), and his three daughters, Nancy, Alice, and Vicki and families. She was also well-loved by the staff in the Corwin Center and will be greatly missed. We are grateful she is enjoying her new home in Heaven assured by her faith in her Lord and Savior, Jesus Christ. "