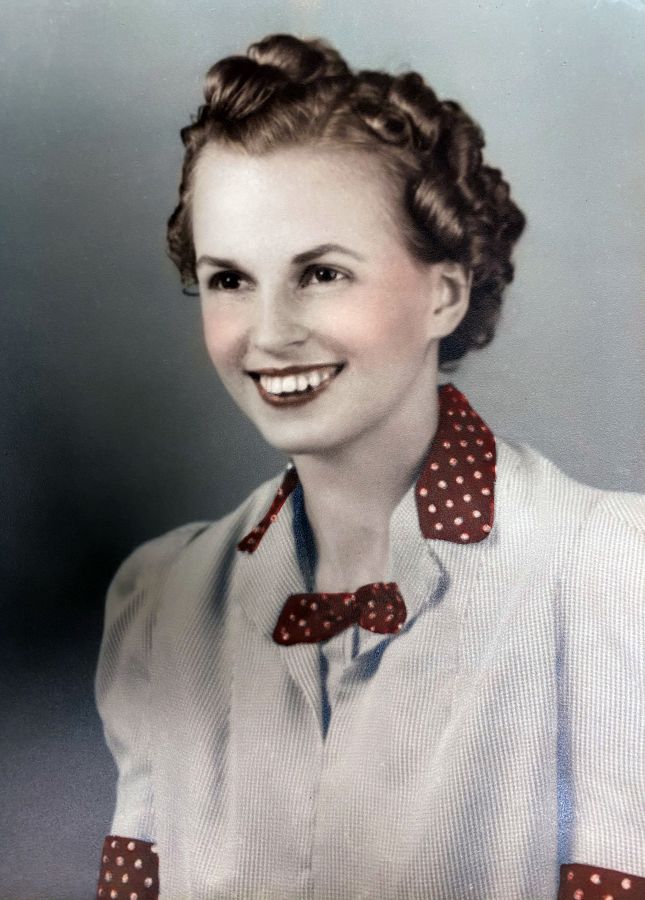 Margaret E. Dafforn was a hard-working lady who guided and encouraged her children to be the best they could be. She was tough but loving and her Christian faith gave her reassurance over her 96 years of life.

The debut of the movies The Ten Commandments and Hunchback of Notre Dame were released in 1923. The year was also remembered for the first baseball game at the newly constructed Yankee Stadium, insulin was introduced for treatment of diabetes, Warner Brothers was established, and the first issue of Time Magazine was released. In technology, the world's first domestic refrigerator was sold in Sweden and the first portable radio was developed in the United States. That same year on November 6th, Loyd D. and Ada G. (Zorger) Ferrell were pleased to announce the birth of their first-born child, Margaret E. Ferrell. She was born on the family farm in Union Township of Whitley County, Indiana and would become known as one of the "Greatest Generations" to live.

At a young age Margaret's family moved farm locations to live in Jefferson Township. She helped raise her younger siblings and learned the value of work at a young age. She graduated from Jefferson Center High School with the Class of 1942. After graduating, she took a job building rocker arms for aircraft engines at General Electric in Fort Wayne during WWII and part of her pay, she gave to her parents to help her family. While roller skating with friends one evening at the Happy Valley Skating Rink, Margaret met a young man that would change the course of her life forever. She and Theron Gale Dafforn fell in love and on June 19, 1943 the two were married at the home of Pastor Arthur Gillespie.

The two first lived in an apartment on Main Street in Columbia City and eventually moved into a farmhouse in Jefferson Township, where they would farm over the years. As her children, Richard "Dick" and Jane were growing up, they attended Saturn Church of God. She helped on the farm but also worked as a Pharmacy Technician at Thornburg Drug Store to help make sure that her children could go to college. She encouraged them to attend college and pursue a career in mechanical engineering, teaching or nursing. After her children went off to college, Margaret went back to working on the farm with Gale.

In her free time Margaret found relaxation in reading a good novel. Danielle Steel was one of her favorite authors and had quite the collection of her writings. She enjoyed knitting, puzzles, tending to her vegetable and flower gardens. Margaret also enjoyed the excitement of a good basketball game or watching wrestling.

In her 80's, she and Gale decided to sell the farm, move into town and built a new house in Columbia City. Unfortunately, on March 11, 2014, Gale passed away after 70 years of marriage. Margaret kept active and continued to live at their home until her passing. At 2:51 a.m. on Friday, March 13, 2020, Margaret E. Dafforn passed away unexpectedly at Parkview Regional Medical Center at the age of 96. She is survived by her son, Richard "Dick" (Kaye) Dafforn of Saline, Michigan; daughter, Jane (Danny) Hubbard of Carmel, Indiana; grandchildren, Jeremy (Christy) Wolfe of Clearwater, Florida, Lerin (Tony) Jackson of Indianapolis, Indiana, Andrew Dafforn of Scottsboro, Alabama, and Neil (Jessica) Dafforn of South Lyon, Michigan; and great-grandchildren, Theron Jackson, Abigail and Alexander Dafforn, and Kaitlyn and Tyler Wolfe. She was preceded in death by her parents; husband, Gale Dafforn in March of 2014; sister, Mildred Norris; and brothers, Chester Ferrell and Donald Ferrell.

A gathering of family and friends will be 1-5 p.m. Sunday, March 15, 2020 at DeMoney-Grimes Funeral Home, 600 Countryside Drive, Columbia City. Funeral services will be 10 a.m. Monday at the funeral home with Pastor Russell Riley. Burial will follow at South Park (Annex) Cemetery. Memorial donations may be made in her memory to the American Cancer Society or Cancer Services of Northeast Indiana. Visit www.demoneygrimes.com to send Margaret's family condolences online.

"So sorry for your loss. I know what it feels like losing both parents. Will keep you in our prayers. Steve Howenstine past away I'm 2014 and Wayne past away in 2010. This is Rhonda Howenstine Ousley"

"We really got to know more about Margaret this past year and enjoyed all of her wonderful stories about the farm. What a truly wonderful and kind person. She will be deeply missed. "

"Aunt Margaret was always so sweet! Always caring and fun. Have some fond memories of our Saturday nights together. My heart is breaking for all of you. God Bless?"

"You are all in my thoughts and prayers! I worked with Margaret at Thornburgs the first few years of married life! She was such a sweetheart and taught me many wonderful things! Jenny Gaff"