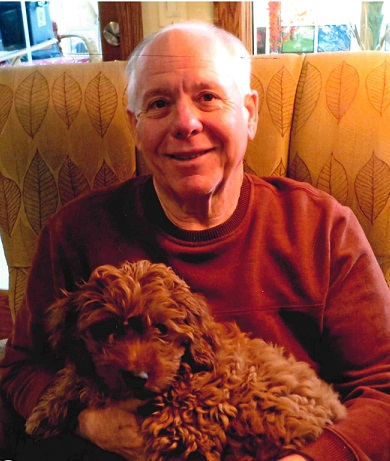 Douglas E. Cross, age 70 of Colfax, passed away on Sunday March 14, 2020, at Nelson Manor in Newton. A private family graveside service will take place at the Colfax Cemetery. There will be a celebration of Doug's life held at the Colfax United Methodist Church at a later date. This will be updated at coburnfuneralhomes.com as soon as it is scheduled. Letters of condolences or gifts may be sent to Coburn Funeral Home.
Douglas E. Cross was born the son of Royal and Frieda Cross on April 24, 1949. He grew up in the Cross Building with all of downtown Colfax as his play yard. He knew no strangers and was friends to most. He was a loveable chap, except when he painted the wings of Mrs. Hanna's pigeons red and set them soaring against the blue sky. Doug's mother Frieda decided he needed "Culturizing" and ballroom dance classes and piano lessons with Miss Eleanor Howell should do it. Doug learned to play one song "Sentimental Journey." The words have appropriate meaning for this special day: "Going to take a sentimental journey, going to put my mind at ease. Going to take a sentimental journey to renew old memories." Doug graduated from Colfax Community School in 1967, where he received awards as "I Dare You" leadership award, National Honor Society, Iowa Boy's State and in football. He held great respect for his principal, David Edwards. In 1967, he was accepted by the University of Northern Iowa and graduated in Business in 1971. His career began with John Deere in 1968, where he was hired into the student program. He took an early retirement as supervisor in 2001 after 32 years of service.
Wedding bells rang on July 24, 1971, when Doug married Karen White. They lived in Ames until Karen graduated from ISU. Their dream came true when they bought an acreage east of Colfax. What a wonderful place to raise their two sons, Joshua and Seth; and enjoy nature. It was a piece of Heaven for the "City Slicker." Doug's favorite pass time was telling his many stories. He also enjoyed fishing, duck and pheasant hunting with his dogs and hunting buddies. The annual Canadian trip to Home of Fine Sportsmen in Saskatoon was a dream come true. He also enjoyed traveling with his family including a three generational trip to Sweden to visit Doug's foreign exchange student and close friend Olle. Doug was a lifetime member of the Colfax United Methodist Church, the Isaak Walton League and Colfax JayCees. Doug loved the gift of life. He loved Colfax and to be his friend was to be his friend for life. He was unable to talk, walk or feed himself for two years and yet he could smile and "Pucker Up" for those precious kisses. He talked with his beautiful brown eyes.
Those left to honor his memory include his wife Karen; sons, Joshua and wife Tami and Seth and his wife Lillie. He loved and adored his four grandchildren, Josie, Walker, Jack Douglas, and Caleb and his brother-friend, Dennis Lind. Preceding Doug in death were his parents.

"I was so sorry to learn of Doug's passing. The obituary was a lovely tribute to him. My sincerest sympathies go to his family. May God be with you during this difficult time. Kay-Nelle Slatkoski Hartwig"

"Always enjoyed our visits with Doug at the Lakes. He was a great friend and we will miss him. Jim and Rhonda Rosenboom "

"He always had a smile on his face"

"I wish I had known Doug before his illness. I felt very honored to have known his dedicated wife Karen thru her daily visits at Nelson Manor. I will miss the many stories of the life and family of Douglas Cross. Prayers for this beautiful family."

"Doug was a true friend. A great memory was the time when we took Doug to a farm in southeast Iowa to scout turkeys prior to the season opening. Norm pointed out turkey signs (poop) and Doug said we didn?t know what we were talking about until we flushed some out and they almost hit him in the head. That year?s turkey season, Doug shot his first turkey. Another wonderful memory was the year Doug and Karen went with us on vacation at Marco Island. Myra and Doug wanted to try parasailing. It was pretty windy that day and they almost didn?t let us go up until they saw Doug ?Tank.? They knew we had enough weight to keep the parasail in check so we got go up that day. One other wonderful memory was the time the four of us were returning from a trip at Lake of the Ozarks. We stopped at a silk flower shop for Karen and Myra to shop. There was an abandoned rail close by and Doug disappeared down the tracks. Later Doug returned with his shirt off and it was loaded full of harvested mushrooms. Yum Yum Doug you are missed and may you rest in peace."

"Was a very special friend. Thanks for touching our lives. You will be so missed. From the Tibben Family."

"Deepest sympathy to you all - Karen, Josh, Seth and family. We were glad we were able to spend some time at the lake just visiting with him and the rest of the family of late. Ron was remembering how Doug and him went hunting in High School. Ron told a story of Doug and Royal coming up to the farm hunting Crow?s, we always have too many of those birds flying around. Doug had a record player which made rabbit sounds to draw the Crows in. Doug was a very good shot and a great guy. Our thoughts and prayers go out to you all. He will be missed. "

"I had the privilege to hunt in Canada with Doug, because a mutual friend Bruce included me in this long time annual event. Doug and I would take off with the dogs in the afternoon while everyone else was on a Vodka nap. We would walk for miles and shoot the prairie chickens, only to find out they were tougher than boiled golf balls. Thanks for the memories Doug."

"My heart aches to hear of Dougs passing. In 1968 Doug joined the Industrial Engineering Department at John Deere Des Moines works and was assigned to work with me. I was impressed from the very first meeting. Quick to learn and eager to learn. One of the people I have met in my 81 years that was a real true friend. I treasure the Cross pen-pencil set he gave me at end of that summer. Rest in Peace Doug. My Condolences to Karen and the Cross family."

"This is a wonderful summary of a life well lived. Your care for your life partner has been a true example of love. Doug was a third cousin on my dad's side and whenever I would run into him he always called me "cuz". Our love to you and your family. You will continue to be in our prayers."

"That is the most beautiful remembrance of Doug-it made me smile, laugh and cry! He truly was ?Mr. Colfax?-our unofficial mayor!!!! There wasn?t a better man than Doug! I?ve never seen anyone that could command a room like he could-you just followed the laughter and he was right in the middle of it! Even if I wouldn?t see him for a couple of years-the minute you ran into him it was an instant story from ?the old days? and alot of teasing and FUN!!! We all lost a true friend...an amazing man and Colfax just lost a bit of its sparkle! Rest In Peace my dear friend-we?ll keep your stories and memories alive to cherish forever! Condolences to his beautiful family."

"Deepest condolences in your sad times. May god be with you. Alice Williams Lincoln"

"Karen, Josh, and Seth. I have many memories of Doug growing up and things we did as adults. First is little league. He coached the Cubs when I played. Many days working on Josh's deck. The many times we hunting together. Keeping you all in my thoughts and prayers. He will be missed by many. "

"Our condolences to your family. - The family of the late Duane Owens "

"I can hear his laugh and miss his stories told only the way Doug could. God bless his family as they establish the new normal. Our thoughts and prayers are with you from your friends in Saskatchewan "

"I lost a great friend and a fishing buddy. Doug was special. I will see him at the next ice cream shop."

"Great guy! Good memories of him bringing the boys to the pool for some fun. No one was a stranger to him. He could talk to anyone. So sorry for your loss! Tracey Edwards Murphy (lifeguard)"

"The obit said it all, great, kind, fun friend and wonderful husband and father. The whole community will miss Doug. My thoughts and prayers are with you all. "