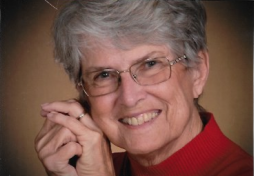 Beverly Irene Purdue, 82, of Noblesville passed away on March 15th in Noblesville.

Bev, to all who knew her, was born in Indianapolis to Laurence and LaDonna (Siddell) Taylor. Her family moved to Evansville shortly thereafter and she graduated from Benjamin Bosse High School in 1955. There was where she met her future spouse, Earl Eugene Purdue, to whom she was married on April 29th, 1961 in Evansville. The young couple soon moved to Indianapolis where she spent the next 20 years raising their two sons. After her sons left the home, she served as a secretary for 20 years for The ARC of Indiana. They supervised the creation and operation of group homes for autistic adults. She helped form the Central Indiana Society for Autistic Children, later receiving a citation from the Governor of the state. She was a lifetime member of the Glendale Seventh-Day Adventist Church, often using her skills on the piano to add a special touch to the services.

Beverly is preceded in death by her parents, her cousin Byron Kent Holdren and her sister-in-law Barbara Purdue.

Beverly is survived by her husband Earl (Gene), her children Lawrence and Christopher, her brother in-law Herschel Purdue, his wife Marian and sister-in-law Mary Purdue.

A Memorial service will be held at Crown Hill Funeral Home, 700 West 38th St., Indianapolis, IN. Rev. Ramon Ulangca, pastor of the Glendale SDA Church, will preside over services and burial at Crown Hill Cemetery.

Memorials may be made to The National Society of Autistic Citizens and/or the Indiana Academy of Seventh Day Adventists in Cicero, IN.

The Purdue family wishes to express their sincere thanks and appreciation to the Kindred Hospice of Indianapolis and Senior Home Companion, Indianapolis, for their untiring efforts in taking special care of Beverly

"To my friend, Herschel Purdue, his wife, Marian, and all Purdue family members, my sincere sympathy for your loss. "

"I wish I had known earlier. All the good times we have are so important to me. I will always miss her as one of my best friends that I loved dearly. Peace to Gene and the boys with love. "

"We were next door neighbors 1970 though most of 1972 and then stayed in touch with this wonderful woman for many years. Our sympathy goes out to Gene and their family. Bob and Marlene Koeller"