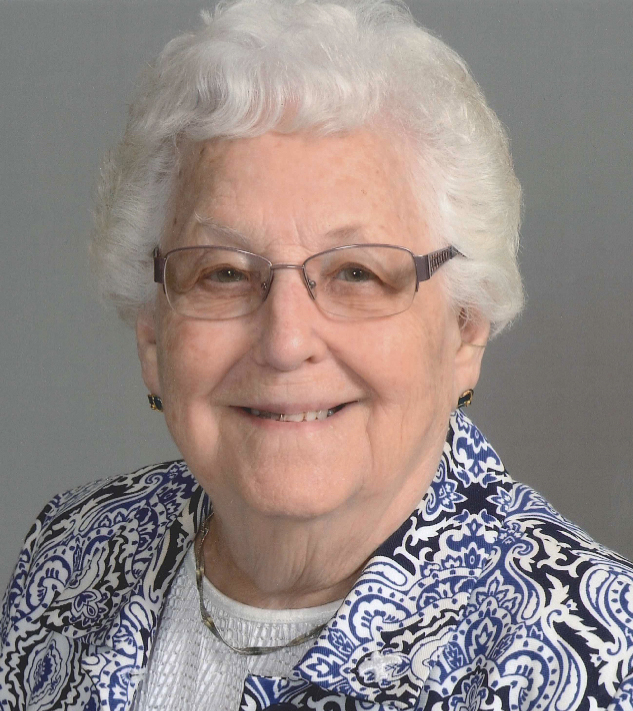 In lieu of flowers, memorials may be directed to Immanuel United Church of Christ in Latimer.

Lorena was born on July 5, 1925, a daughter of Louis and Louise (Imerman) Plagge, near Latimer, Iowa. She was baptized and confirmed by Reverend Barth at Marion Center Evangelical Church in Latimer. Lorena attended country school and graduated from Latimer High School in 1942 at age 16.

After graduation she worked as receptionist, bookkeeper and assistant at a medical office in Hampton with two doctors and a dentist.

She was married to Don Koch on November 10, 1946, by Reverend Wintermeyer at the Marion Center Immanuel Evangelical Church where she was an active member, teaching Sunday School for many years.

After the church moved to Latimer and became Immanuel United Church of Christ, she continued teaching Sunday School for many more years and served on numerous committees. She and Don were youth counselors and members of Philathea. She was a member of the hospital auxiliary, women's clubs and Latimer Park Society. She enjoyed playing golf, cards and having coffee with friends. She loved her family and they were the most important to her.

Don and Lorena farmed northwest of Latimer, where they raised their four sons. They bred registered Landrace hogs and registered Charolais cattle. In 1969, they sold the entire herd and acquired the Latimer State Bank.

After retiring, she and Don worked at the Iowa State Fair during many summers. They spent eighteen years wintering in Texas, and worked with the Nomads in Texas, Mexico and Alaska. Nomads was a mission organization that worked in churches and with Habitat for Humanity building homes. They also spent many hours working in Mexico, helping unfortunate people find a better life.

She was preceded in death by her parents Louis and Louise, brothers Lavern and wife Shirley, Herbert and wife Margaret, and Wayne, sister Elaine and husband Don, granddaughter Lacey Koch and brothers and sisters-in-law Berl and wife Tina, Bob and wife Alpharetta and Howard and wife Helen.

"We enjoyed winters in Harlingen, Texas, Sunshine Park, where they wintered. So much fun together!"

"We enjoyed winters in Harlingen, Texas, Sunshine Park, where they wintered. So much fun together!"

"I remember Lorena as a person who always led an active life; keeping up with those boys was a full-time job and then some! My sympathies to your entire family on the loss of your mom, grandma and great-grandmother. She will be missed. Karin (Borcherding) Winwood"

"Lorena was a very special lady that our family got to know during the recent years. Lorena and one of her classmates , Mildred Johansson became very close friends again at assisted living and in the care center. Our entire family enjoyed her happy and bubbly personality. She will truly be missed. Please accept our deepest sympathies from: Kurt&Judy Guldberg, Kay Baker and the entire Johansen Family"