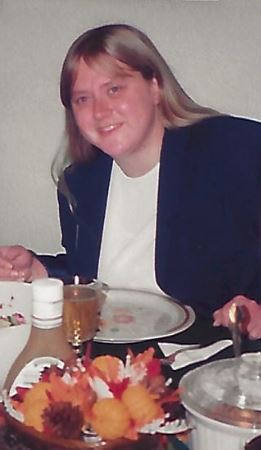 Arleen died unexpectantly from complications of kidney disease, March 20, 2020 in her Seattle, Washington home. Her last ten years of life were complicated by multiple health problems brought on by severe lymphedema.

Arleen was born December 10, 1962 to Karl and Margaret L. Andersen in Seattle. She grew up in Seattle's View Ridge neighborhood and was a 1981 Roosevelt graduate. After high school she worked in a variety of jobs, until she returned to college at age 40. She completed her A.A. degree at North Seattle Community College, and her B.A. in Sociology at Seattle Pacific University in 2010. Arleen liked watching moves, writing stories, singing, and spending time with friends and family. Her favorite holiday was Christmas; she loved the decorations, the music, the holiday joy, special food, and time with friends and family. Arleen was a Christian, loved Jesus, and faithfully attended church services until her health declined.

The world lost a kind soul, heaven gained an angel.

A memorial service will be held at a later date.