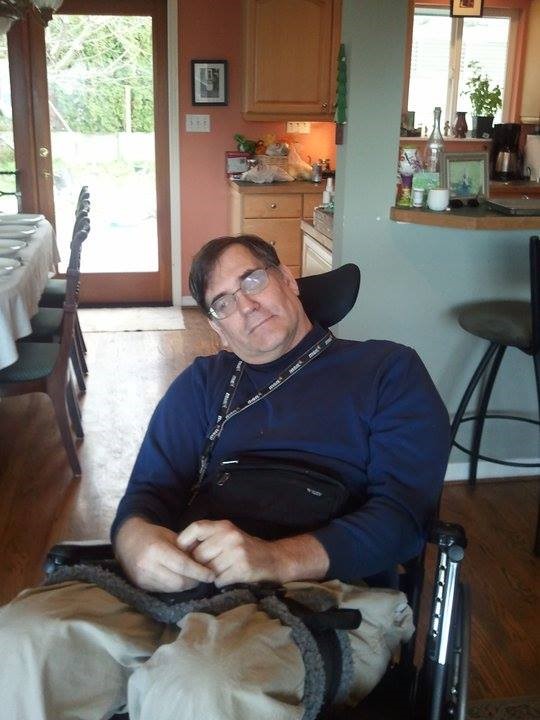 When I first emerged, the umbilical cord was wrapped around my neck and I've been hanging in there ever since. I met my maker in 1975 when I went to a listen to a speaker. The speaker's name was Calvin Jones, he was a former football player at the UW, and I decided in that moment to follow Christ. One thing I said when I did jail ministry is, "you are confined by these bars, I am confined by this body". Another line I used in jail ministry is 'When the Son sets you free, you are free indeed'. MS has done a lot to me, but it didn't keep me out of jail for good reasons not for bad ones.

My faith line is, "I survived 12 years of Catholic School and Wheaton College and I still believe". I'm thankful I can still speak as some people with Multiple Sclerosis cannot. I have three aggravating sisters that are relatively nice: Jan, Teresa and Joenne (I'm laughing at my sick joke) and my brother Tom. I have a ton of relatively awesome nieces, nephews and great nieces and nephews. And I had a very pretty girl from Hawaii (who passed in April 2019), Gale who is my Hot Hawaiian Honey. Gale said that, "MS stands for Much Shit", I say it has nothing to do with PMS". Known for my sick humor, also known as Danisms I learned to laugh not to cry. "I am Free Indeed".

"Dan was a long time friend and brother in Christ. I first met him at University Presbyterian Church where he was on the leadership team for the Cornerstone group. He was still getting around with a walker back then. When he was confined to a wheelchair he still managed to go to King County Jail and counsel inmates. He?d tell them, ?Pray today. Pray everyday. And especially pray on the day you get released, because the temptations will be there that led to your being jailed in the first place.? Dan was very proud of his stand up comedy routine, ?Multiple Challenges?. Dan never got over having his written memoirs stolen, but I recorded an hour long interview of him on CD. He had a copy, and I have one that I could make copies of for family and friends. I visited Dan regularly, but when I got cancer it got reduced to quarterly visits. With COVID lockdowns I have had no contact with him since that started. I just now learned of his passing. I always loved his sense of humor. See you on the other side, brother. johnwasko@yahoo.com"

"Dan was the person that led me to to Christ at the U of Dub. God bless him and his family. "

"To Dan?s family, Please except my deepest sympathy during this time of sadness. I never had the pleasure of meeting Dan in person however I became remarkably familiar with Dan and his physical condition through his brother Tom. Tom always spoke highly of Dan with kind words and concerned worries of his situation. It is warming to know that Dan lived his life through the physical disabilities he received and was able to contribute to society through the love, faith assisting and sense of humor he shared. MS is a terrible misfortune to many, terrible because of its disabling character and unfortunate because not enough is spent on its research. Rest in peace my friend and we will meet someday. James Milligan "

"We met Dan when his father married my mom After both of their spouses passed away. We were amazed and inspired by Dans inner strength and unwavering faith in the God who made him. I?m sure he had his moments of frustration and disappointment but we certainly never saw them. And just reading The self crafted obit says volumes about Who he was as a man. I can only imagine how many lives he resurrected With his prison ministry. Prayers and good thoughts For Teresa and other family members who?s Ministry was to help care for Dan? John & Kay Donaldson "

"I'm saddened at your parting but relieved to know I will see you again. See you on theother side..."

"?FUD? Famous Uncle Dan - that?s what you wanted me to call you. You are more than famous to me- you blessed my life- I Love YOU ?? I will never forget you- I can promise Your Niece Kerri Ann Wiser"