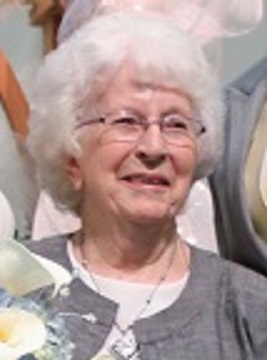 Hazel Mae Streeter, age 93 of Mitchellville, passed away on Tuesday, May 19, 2020 at Courtyard Estates in Bondurant. Private family graveside services will be held at Lowman Cemetery near Runnells, Iowa. Memorials may be directed to the Federated Church in Bondurant and condolences may be left for the family at www.coburnfuneralhomes.com
The daughter of Arthur and Evaline (Strait) McNeeley, Hazel was born on June 11, 1926 in Swan, Iowa. On September 5, 1942, she was united in marriage to Ernest O. Streeter in Kansas City, Missouri. Hazel was a member of the Federated Church in Bondurant. She enjoyed reading, crocheting, camping and crafts.
Those left to honor her memory include her two daughters, Charlotte (Don) Miller and Connie (Ron) Pinegar; three grandchildren, Renee (Troy) McGill, Alicia (Troy) Albertson, and Trevor (Kim) Pinegar and seven great grandchildren, Taylor, Grace, Rose, Hannah, Kennedy, Conrad, and Lincoln. Preceding Hazel in death were her parents, husband in 1982 and her siblings, Faye, Ben, Earl, Eldon, Ralph, Virgil and Viola.

"Hazel was a dear friend to me, one thing she used to say is that anyone who knew her would know that she loved Jesus and she loved her family.. She carried her family in her heart and shared often about them. It was such a joy to hear about her grand kids, and about her daughter's growing up. She told about "Mrs. Greene's restaurant " at meal times when her girls were young.She loved Ernest so much, and spoke about how they married when she was still in high school and then he had to go off to war.I met her after he died, she started working at Mercy, she became like a mother to me.When my son lost his leg to cancer (and later his life) we went over to visit her and he showed her how he could run with his prosthetic leg.She was so thrilled about seeing him run.Once when he was in the hospital at Blank, she stopped by,and brought some sandwiches, she walked past a courtyard that had some unclothed girls dancing,she kept saying she was going to sew them some clothes! She was so supportive during Joel's illness and death. She was such of a great example of a godly woman,wife,mother,grandmother and friend.My life has been deeply impacted by having known her I will always treasure her memory. "