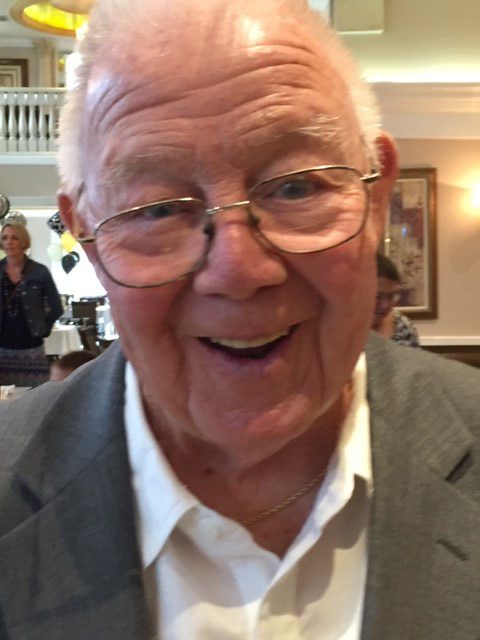 Bush, Joseph L., 91 years young, died May 18 surrounded by family members. Joe was born in Philadelphia, one of six children. His brothers Charles and Frank and sisters Dorothy and Kathleen predeceased him. His sister Mary Devlin of Philadelphia survives him.

Joe was happily married to Sophia Bider and Mary Evans Vohringer, both of whom predeceased him. His stepchildren, who called him their other father, survive him: Betty (Charles) Kemeny, Charlotte Lafferty, Barbara (Daniel) Stebbins, Mary Vohringer and John Sweet and James (Edie) Vohringer. Also surviving are several nieces, nephews, grandchildren and great-grandchildren.

Joe was a longtime resident of Runnemede which he called the best town in NJ. He was a lifetime member of American Legion Post 84 in Oaklyn, the Senior Club of Runnemede and a member of Trinity Lutheran Church (formerly Ascension Lutheran). He retired from Campbell Soup Company in 1991 after 43 years of service.

Joe will be sorely missed by his loved ones, friends and neighbors. He was a great story teller and had such a wonderful laugh and positive attitude. He loved the Flyers, Phillies and playing cards. We'd like to thank neighbors, especially Bill and Joanne, for helping during his illness and Samaritan Hospice, especially Doreen and Sharine, for their help and support.

A celebration of Joe's life will be held at a later date. In lieu of flowers, a contribution in Joe's name may be made to Trinity Lutheran Church (200 E. Clements Bridge Road, Runnemede, NJ 08078.

"Joe was such a kind and decent man. He always had a smile and "a how ya doing?", whenever I saw him. He lived a long and well loved life. All the adult children of his wife, Mary loved and honored Joe. He was truly a father and grandfather to all of them. Joe will be missed sorely. I can imagine that God welcomed Joe home as he passed from this Earth."

"THE SPIRIT OF THE SOVEREIGN LORD JEHOVAH IS UPON ME. BECAUSE JEHOVAH ANOINTED ME TO DECLARE GOOD NEWS TO THE MEEK. HE SENY ME TO BIND UP THE BROKED HEARTED ONES "