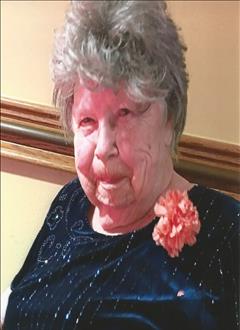 Margaret (Daisy Lawson) Gravin, 96,of Fort Dodge passed away on Friday, May 22, 2020 at the Marian Home following a short illness. Her wishes were to have her body donated to the University of Iowa. Services are pending. Laufersweiler-Sievers Funeral Home is serving the family.
She was born and raised in Athol, Kentucky to Park and Ida (Ratliff) Lawson. Margaret married Richard Gravin and they later divorced. He preceded her in death.
Margaret worked for many years at the American Can Co. in Chicago and later in 1968 in Fort Dodge. She also did seamstress work in the community. Margaret moved to thr Marian Home on June 26, 2008.
She had 1 sister Dorothy Terry, 3 step sisters and 3 step brothers. There are no known living survivors.
Margaret will be missed by the caregivers at the Marian Home, friends and her special friends Jerry and Mary Bruening.