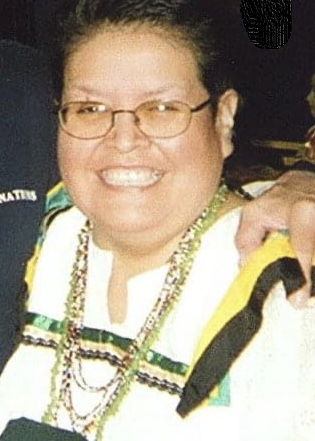 Jennifer Ramona Wallen (Jen Jen, Ishe, Jen Ten Bears, Sis-Bro) was born at Los Angeles, CA on July 24, 1963. Her parents were Victor George Wallen and Ramona Wallen, nee Allen. She was an enrolled member of the White Mountain Apache Tribe on her father's side, and lineage of her mother's, was San Carlos Apache. Her paternal grandmother was Mary Goodman from the White Earth Reservation, Bemidji Agency, Minnesota and her paternal grandfather George Wallen was from the White Mountain Apache Tribe Cibecue, AZ. Her maternal grandmother was Dorthy Naltazan and maternal grandfather, Ferris Allen, both from the San Carlos Apache Tribe, San Carlos, AZ.

As a child she enjoyed basketball, swimming at the river, riding her bike, her black and white cat named Sylvester, and cook outs. At the coaching and encouragement of her father Jen began singing at age 12, her favorites were Tanya Tucker and Crystal Gayle. Jen continued her talent of singing into her adult years and had a beautiful voice. Her hobbies included writing poetry, doing bead work, weaving with cedar such as bags, baskets, hats, and roses, making necklaces, often gifting her creations freely to people she cared about.

Jen attended Whiteriver Elementary School, eventually graduating from East Fork Lutheran High School. She attended college for one year at New Ulm, Minnesota. She completed an Interdisciplinary degree in June 2002 from Western Washington University; studied Curriculum and Instruction, teaching English as a Second Language in 2013, and was in the process of working on her PhD (year 5) in Educational psychology at the University of Washington, until chronic illness set in around 2013. However, over the years, Jen continued serving as an educator in many capacities, working within the greater urban Indigenous community as an activist, cultural educator, sharing songs and prayers at special events when asked to do so.

Jen made the Pacific Northwest and Washington State her home, settling here in the city of Shoreline with her partner of nearly 20 years, Ms. Harini Reese. She established close ties to the Tribes of this region, such as the Lummi Nation. She touched the lives of many in cultural teachings, her beautiful singing voice, as well as her kind, generous spirit. She participated in cultural ceremonies such as the Sundance and was a pipe carrier.

A Celebration of Life for Jen will be held at a later date.