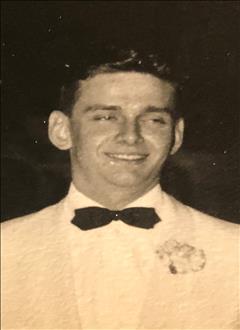 Donald R. Nordstrom, 86, of Fort Dodge passed away Monday, June 29, 2020 at the Paula J. Baber Hospice Home.
A Mass of Christian Burial will be 10:30 AM Thursday, July 2, 2020 at Corpus Christi Church with Msgr. Kevin McCoy officiating. Burial will follow in Corpus Christi Cemetery. A visitation will be 5:00 to 8:00 PM Wednesday at Laufersweiler-Sievers Funeral Home.
Donald is survived by his wife, Earlene; children, Annette (Tim) McClintock, Sheryl (Kyle) Ruge all of Fort Dodge, and daughter-in-law, Maureen "Mo" Nordstrom of Fort Dodge; 14 grandchildren; Travis (Kendra) McClintock, Justin (Holly) McClintock, Cody (Sam) McClintock, Jessica (Shawn) Heaning, Libbie McClintock, Lisa (Bryan) Odendahl, Donnie (Amber) Nordstrom, Greg Nordstrom, Dirk (Sigrid) Ruge, Cole (Ashley) Ruge, Heath (Courtney) Ruge, Brooke (Jason) Breeland, Grant (Taylor) Ruge, Abby Ruge; 24 great-grandchildren with 2 on the way; siblings, John Nordstrom (Barbara) of Keller, TX, Ronald Nordstrom (Marnell) of Fort Dodge, Mary Freese (Jim), of Albuquerque, NM, and Jo Johnson of Fort Dodge.
He was preceded in death by his parents, Reynold and Evelyn (Coats) Nordstrom, beloved son, John Nordstrom; and siblings, Geraldine Nordstrom, Jackie Appleton, Pat Sorber, and Evelyn Jones; and in-laws, Jack and Evelyn Schuller.
Donald Ray Nordstrom was born January 14, 1934 in Dayton, IA. He was a lifetime resident of Fort Dodge where he was raised and attended school and was actively involved in baseball and wrestling. On June 5, 1954, Donald was united in marriage to Earlene Schuller at Sacred Heart Church. The couple made their home in Fort Dodge. Donald worked for Sears as the Manager of the Service Department for 21 years. In 1983, Donald and his wife, Earlene became co-owners of L & D Cleaning and Laundry. They eventually became the sole owners and operated the business until their retirement in 2000. Donald enjoyed building stock cars in his free time. He was a past member of the Elks Club, where he served as the Exalted Ruler for two terms in the Fort Dodge Chapter. He was a coach for little league baseball. He participated in the Barbershop Chorus and the Corpus Christi Adult Choir. He also served on the Citizens Community Credit Union Board. Donald loved spending quality time in Okoboji with his family boating and loved crackin' those jokes (Hold that tiger). Some of his favorite hobbies were playing card games with grandchildren, going for a "sandwich", singing and dancing and enjoyed buying cars. He was beloved by his grandchildren and all of his family, many nieces and nephews and will be missed dearly.
Memorials may be left to family's discretion.

"Absolutely loved this man! So many good memories of Don and I spending time with Don and Earlene at dry cleaners events. We had so much fun and many laughs. He was always a gentleman and will be missed greatly. Gods blessings to your family and love you, Earlene"

"Earlene and family, we are so sad for you in your loss. Don was always a delight to be around - like a breath of fresh air when he walked into a room. Mr. Happy describes him with his smile and endless jokes to make us smile. I first remember the cute guy back in the 50's who stole Earlene-s heart. They were the greatest couple together. Heaven has just welcomed a man of genuine friendship and humor. It was always great to seeing Don and Earlene waltzing around the ballroom when they attended our dances. Hugs to you, Earlene, and your family. Ruth and Tom Steinkoenig"