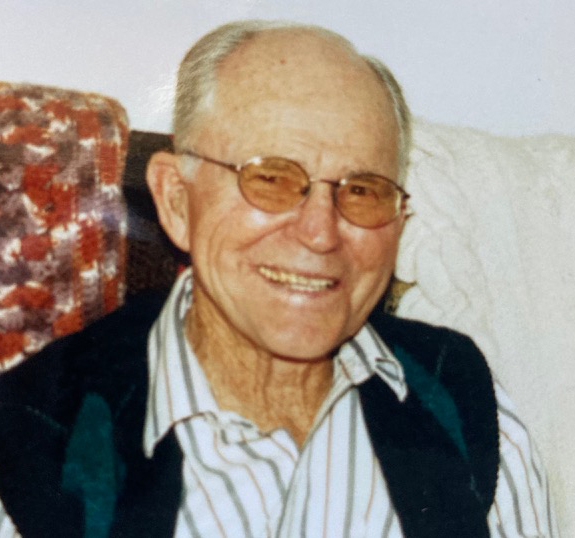 
Robert Wesley McCormick (aka Bob or RW) left his well-used earthly body on July 4. Independence Day was the perfect day for this WWII Marine to obtain this freedom. Born December 6, 1922, in Latimer, Iowa, Bob was the eldest (and only boy) of 6 who took his responsibility as a big brother seriously and adored his sisters. He married the love of his life, Lavonne Waldorf, on November 25, 1956 and for the past 64 years they loved, raised a family, and worked side by side. And she is the one he wanted by his side in his last days.

Bob volunteered to serve in WWII and as he told it, all the other guys in the room signed up for Army, Navy, Air Force, so he raised their hand for the Marines. The Iowa farm boy who had never seen a body of water bigger than Beed's Lake found himself in Hollywood, California training for departure on a huge ship. They never did teach him to swim but when they asked if anyone could cut hair, up went his hand again! They handed him 12 broken clippers which he rearranged into one working pair. We still have them and he was cutting hair with them well into his 80's. They did tend to over-heat by that time, so he'd put them in the freezer for 10 minutes, then carry on!

He served in the Asiatic Pacific area, embarking from Hilo, Hawaii on the USS Bowie on August 23, 1945, arriving at Pearl Harbor the next day. He then sailed on September 1, 1945, arriving in Saipan on September 13 and three days later at Sasebo, Kyushu, Japan. He participated in the occupation of that area as a member of Fifth Marine Division until October 20, 1945. He told stories of guarding General Tojo in the yard at his war crimes tribunals. While his military service was serious and a source of pride, his stories of that time were hilarious and always had the room in stitches. From a tent collapse on Peleliu Island to pranks pulled on the officers using the bathroom trench; Bob was a story-teller and prankster extraordinaire.

Always a baseball lover, after his discharge, Bob left the farm and found his way to the George Barr Umpire School in Florida. He also attended Arthur Murray's Dance Academy as he had heard that a good dancer was sure to catch the ladies attention! He had offers from pro teams but decided his heart was on the family farm so he returned to Iowa where he was a rural mail carrier, a farmer, and a referee and umpire across the state.

As his grandsons Travis and Kyle remember, Grandpa Bob ALWAYS had on either his WWII hat or his beloved Yankees hat. He was fortunate to have watched his team play in both the old AND the new Yankee stadium in NYC after a harrowing ride there with his son-in-law Phil Hunt driving. He often said he never quite recovered from that ride!

Bob was proud of his Irish roots and had quite a store of his own special sayings. His daughter-in-law, Sheila, remembers his "top 'o the mornin' to ya" and his sparkling "side smile". His granddaughter, Jacky remembers his special morning greeting, "Good morning, Glory! How do you dew drop?" Not a St. Patrick's Day went by without a phone call to his three kids that opened with, "Top 'o the mornin' to ya, Paddy. Take two and punch to the right."

Bob claimed he was tone deaf musically but he could cut a rug! Granddaughter Liz remembers "May I have the next dance?" whenever he saw her. He and Lavonne were frequent flyers at the Surf Ballroom in Clear Lake, Iowa, and even appeared in a recent documentary of the Ballroom.

Bob spent many hours with his best friends, Doc Martin and Doc Wirtz hunting and fishing and pulling pranks; his activities and involvements could fill a book. Among them, he was a proud Mason, served on many boards, the American Legion and the Shriners, but his true loves were family and his farm.
He had three children and got one of each for his passions: a farmer, a retired military, and a songbird/storyteller.

Two of his great-grandchildren said it best when they were told that Grandpa Bob was gone. Little Hallie burst into tears and said, "But I love him!" And five-year-old Tucker said, "Now he can farm in heaven, right?" Exactly right. We love him and we will miss his presence but he's happy farming and maybe even playing a little ball with The Babe up there!

In lieu of flowers, we ask that you make a contribution to either treesforever.org or campcourageous.org.

"What a beautifully written obituary, encapsulating the lovely essence of the man and his family. Uncle Bob's wonderful smile is what I remember! Sending deepest condolences and best thoughts to all of you."

"?I remember Uncle Bob?s charolois cows and the bull on his family farm where his in-laws lived for awhile. He was so patriotic I think he?d be happy he passed on the 4th. I know he was extremely proud of Randy?s wonderful service to our country. He was glad Rob went into agriculture. And he was so in love with his beautiful and talented Julie. I hope his children and wife will take comfort in the long life he lived. ?"

"I loved the memories told in Bob?s obituary. They truly showed his humor. I remember Bob for the great friend and nephew he was to my dad, Maynard. They even looked alike! Blessings to all of his family. "

"Dean Dodd Robert "Bob" McCormick was a man who always played by the rules. Baseball was important to Bob, as a game. He knew that rules had to be established and followed in order for the game to be appreciated by players and spectators alike. Bob and his family also knew that the "game of life" needed rules to be made and umpired in order for all to enjoy. The Dean Dodd family wishes to thank Bob McCormick and family for providing the example to live by the rules. "

"Your dad was one of the kindest, caring people I have ever met. Heaven has gained a very special angel. He will be missed by all who had the privilege of knowing him. Tim and Joyce Borcherding"

"Sorry for your Loss, He was quite an interesting Man to talk to always enjoyed visiting with Him, He is in a better place! Dave and Peggi Meyer"

"Loved his family, loved his country. One of the most patient men I have ever had the honor of knowing. I will miss him dearly. Thanks for all of the lessons "dad".."

"Oh I just read that Bob has passed. I am so sorry for your family. He was such a special man and I so enjoyed taking care of him, and then visiting him at the NF and having him come to listen to the stories I read. I have so missed being able to go to FGH NF to visit. How fitting that a "hero" passed on Independence Day. Love Elaine Crabtree."