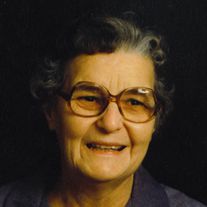 Minnie Peterson, 88, of Mt. Pleasant, IA, formerly of Wayland, IA, died Monday, February 20, 2006, at the Park Place Long Term Care Unit in Mt. Pleasant, Visitation will begin after 12:00 noon on Wednesday at the Olson-Powell Memorial Chapel, where the family will receive friends from 6:00 - 8:00 p.m. that evening. Funeral services will be held at 10:30 a.m. on Thursday at the Olson-Powell Chapel with Pastor Jeff Crawford officiating. Burial will be in the North Hill Cemetery. In lieu of flowers, memorials have been established to the Hospice of Central Iowa and the Alzheimer's Foundation in her memory. Born November 15, 1917, in Wayland, IA, Minnie Fern was the daughter of David and Naomi (Kinney) Rich. She attended the Douglas School, southwest of Wayland. On March 19, 1949, she married Loren E. "Pete" Peterson in Washington, IA. He preceded her in death on March 17, 2000. Mrs. Peterson was a homemaker and was well known for her cooking. She attended numerous bible studies and was a member of the Wayland Methodist Church. Her greatest love was spending time with her family, especially with her grandchildren. Survivors include her son Rick Peterson of Shell Lake, Wisconsin; five daughters, Cheryl Hembry of Emerson, IA, Linda Metcalf of Oakville, IA, Jan Heinz of Burlington, IA, Gail Denning and Carol Stevenson, both of Des Moines, IA. Also surviving are fifteen grandchildren, twenty great-grandchildren, and by a special niece, Pam Kindig of Mt. Pleasant, IA. She was preceded in death by her parents, her husband, a son Alden, four brothers, Earl Rich, Ray Rich, Glen Rich and Max Rich; and six sisters, Velma Messer, Freda Sinn, Georgia Imhoff, Mina Holt, Ada Kindig and Lola Bower.