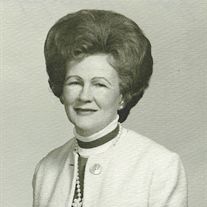 Geraldine L. Smith, of Mt. Pleasant, IA, died Tuesday, February 28, 2006, of heart failure. Visitation will begin after 12:00 noon on Friday at the Olson - Powell Memorial Chapel, where the family will receive friends from 6:00-8:00 p.m. that evening. Funeral services will be held Saturday, March 4, at 11:00 a.m. at the Calvary Baptist Church with Pastor Jeff Crawford officiating. Burial will be in the Forest Home Cemetery. Memorials have been established to Calvary Baptist Church and Pancreatic Cancer Research. Born in Merrimac, IA, Geraldine was the daughter of Joseph L. and Katie Hyde Ross. On January 14, 1932, she married Francis L. Smith at the home of the Rev. Arthur L. Shuey in Mt. Pleasant, Iowa. He survives. Geraldine and Francis raised one son, Robert L. Smith, who was born on September 7, 1934. He passed away on August 12, 2000, of pancreatic cancer. Mrs. Smith graduated from the Burlington Beauty Academy. She studied music at Iowa Wesleyan College. She owned and operated Geraldine's Little Prince and Princess Shop for children. She also owned and operated the Magic Mirror Beauty Salon. She had worked as an assistant manager of the shoe department at Younker's in West Burlington, manager of Ashley's Store in Mt. Pleasant, and Essex Women's ready to wear store. Geraldine was involved in many activities over the years. She played organ at the Chapel at Midwest Old Threshers. She was the president of Gideon's Auxiliary and also served as secretary. She was a member of Business and Professional Women. A member of the Henry County Republican Women, Mrs. Smith also served as a member of the Henry County Republican Central Committee and was a Bush team leader for the 2000 Presidential Election, and later attended the President's Inauguration in Washington, D.C. Geraldine was a member of Green Mound Church where she was the pianist, taught Sunday School and served on many committees. The couple moved to Mt. Pleasant and joined the First Baptist Church where she was the organist and served as a deaconess. She served as the president of the American Baptist Women and was the president of the Eunice Circle. Mrs. Smith was coordinator of Church and Community Ministries for Area III. She also served as co-chairman for the sesquicentennial celebration of the First Baptist Church. Later the couple joined the Calvary Baptist Church in Mt. Pleasant, where she became an active member. Along with her husband, Francis, Mrs. Smith is survived by three granddaughters, Christa and her husband, Reed Martin, of Marion, Iowa, Terri and her husband, Grant Walker, of Washington, IA, and Robin Vaccaro of Burlington, IA; one brother, Russell Ross and his wife, Rosie, of Mt. Pleasant, IA; and one daughter-in-law, Ruth Smith of Burlington, Iowa. She is also survived by seven grandchildren, Elise Martin, Andrew Martin, Keaton Walker, Kalob Walker, Alexa Walker, Hannah Dameron, and Sullivan Dameron. She is also survived by many nieces and nephews. Mrs. Smith was preceded in death by one son, Robert L. Smith, along with her brothers and sisters, Ruth Tschantz, Marie Courtney, Bessie Scarff, Edith Lane, Paul Ross, and Dale Ross.