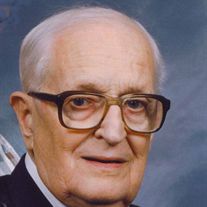 Milton "Fuzz" Roederer, 88, of Mt. Pleasant, IA died Saturday, March 11, 2006, at Arbor Court in Mt. Pleasant. Visitation will begin after 12:00 noon on Monday at the Olson - Powell Memorial Chapel, where a rosary will be recited by the Knights of Columbus at 6:00 p.m. Monday evening. The family will receive friends following the rosary service. Funeral mass will be held Tuesday at 10:30 a.m. at St. Alphonsus Catholic Church with the Rev. Nicholas J. Adam, celebrant. Interment will be in the St. Alphonsus Catholic Cemetery. In lieu of flowers, memorials may be given to the St. Alphonsus Building Fund. Born July 1, 1917 in New London, Iowa, he was the son of Edward and Mae Wiekle Roederer. He was a 1934 graduate of Mt. Pleasant High School. He entered the U.S. Army in September 1943. He served in WWII in the Infantry in France and Germany, where he participated in the D-Day invasion at Normandy. He received three overseas service bars for the European, African, and Middle Eastern Campaign, receiving one bronze battle star, a good conduct medal, Purple Heart, and the WWII Victory Medal. Sergeant Roederer was honorably discharged March 1946. On December 11, 1947, he married Ruth Taylor in Mt. Pleasant. She survives. Mr. Roederer worked for Lamm's Shoe Store, and Sheaffer Pen, before managing Roederer's Clothing for Men and Boys for over 20 years on the Mt. Pleasant square. Milton was a life long member of the St. Alphonsus Catholic Church and a charter member of the Knights of Columbus. An avid golfer, he belonged to the Mt. Pleasant Golf and Country Club for 50 years. He was an enthusiastic supporter of Mt. Pleasant Community High School and Iowa Wesleyan sports, where he served as an official score keeper for both basketball teams for over 50 years. Along with his wife, Mr. Roederer is survived by four sons, John Roederer and his wife Janet of Mt. Pleasant, IA, Robert Roederer and his wife Debi of Mt. Pleasant, IA, William Roederer and his wife Lisa of Ogden, Iowa, and David Roederer and his wife Paula of Johnston, IA. He is also survived by 10 grandchildren, and 14 great-grandchildren. Mr. Roederer was preceded in death by a brother, Jim Roederer, and his parents.