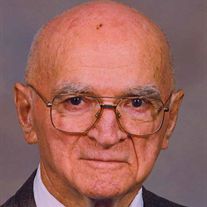 John A. Stephens, 87, of Mt. Pleasant, IA, died Monday, March 13, 2006, at the Parkview Care Center in Fairfield. Visitation will be held from 9:00 a.m. until 10:30 a.m. Thursday at the Olson - Powell Memorial Chapel. Funeral services will then be held at 10:30 a.m. at the Memorial Chapel with the Reverend Dr. Edward R. Peterson officiating. Burial will be in the Forest Home Cemetery with military rites. In lieu of flowers memorials have been established to the First United Methodist Church and the Mt. Pleasant Rotary Club. Born August 19, 1918, in Ainsworth, IA, he was the son of Samual Allen and Mildred Jane Stearns Stephens. He graduated from Ainsworth High School and received his B. A. degree from Iowa Wesleyan College. Mr. Stephens was drafted into the United States Army in 1941, and initially served in the U.S. Army Signal Regiment. He later served in Hawaii in the Radio Maintenance Division during World War II. Tech Sergeant Stephens was discharged from military duty in 1946. On October 16, 1943, he married Florence Lily Fimmen. She preceded him in death on May 25, 1999. John taught school at Keota High School and later was a regional field manager for Farm Bureau. He returned to college in 1961 and received his Jurisdoctorate Degree from Drake University. He practiced law in Bloomfield, IA, for 25 years before retiring. He was a member of the First United Methodist Church of Mt. Pleasant, the Iowa Bar Association, the Ainsworth Masonic Lodge, the American Legion, the V.F.W. and was a member of the Rotary Club. He is survived by five nieces, including Molly Alvine and her husband Dwight of Mt. Pleasant, IA, and two nephews. He was preceded in death by his wife and two sisters Marian Rich and Wilma Evans.